Cook thinks of quitting England leadership after yet another collapse 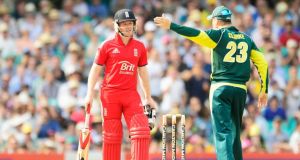 figure, admitted he would now be considering his future in both forms of the game after a comprehensive seven-wicket defeat at the SCG.

Cook, who admitted he is considering his position as England’s one day and Test Match captain, will at least stay in place for the final two matches of a chastening series that has left England one match away from equalling their worst losing streak of 10 successive defeats, with the chance to set a new personal worst in Adelaide in the final match.

For now it was a case of another week, another ground, another series lost at the Sydney Cricket Ground. England have already been out-batted and out-bowled by Australia on this tour. Here, by way of variation, they were comprehensively and aggressively out-fielded.

In the end Australia’s batsmen made light work of their run chase, reeling in England’s 243 with 10 overs to spare.

But in a way Australia’s victory was most notable for their performance in the field, with Michael Clarke and Dan Christian taking spectacular one-handed catches to get rid of Ben Stokes and Eoin Morgan respectively.

Perhaps the most telling moment came in the first over of Australia’s reply. David Warner, who had earlier run out Ian Bell with a kind of one-stump miracle-throw from deep point, had given up on making his ground as Ravi Bopara prepared to hurl down the stumps.

Bopara did not even get close. England’s shoulders sagged. Warner went on to clout a gleefully dismissive 71.

Batted first
Cook had won the toss and batted first on a pitch that has tended to favour defending a total. Australia made three changes, Mitchell Johnson’s absence opening the door for the return of James Pattinson for his first match since the Lord’s Test six months.

England did build a platform here, moving to 50 without loss in the ninth over, sped along by a slightly fretful attempt to force the pace at the top of the order. They just did not build anything on top of it as the rest of the batting came teetering down.

Cook produced two beautiful punches through the covers in Pattinson’s second over and even England’s first six of the opening powerplay overs in this series, easing Nathan Coulter-Nile over square leg with a lovely free swing.

It was, though, a false start as Coulter-Nile still managed to bowl his opening five overs for 16 runs.

Cook was eventually well caught by Glenn Maxwell at cover for 35 to bring Stokes to the crease.

Bell was run out for 25 as Warner hit the target with the batsman short coming back. Stokes swept hard at Xavier Doherty but saw Clarke dive at full horizontal stretch to his right to take the ball and send him on his way for 15 off 39 balls.

Morgan hit a pair of thrilling straight sixes en route to 54 from 58 balls, another beautifully frictionless innings from a man who has looked like the only grown-up on the pitch when England are batting. But England prodded though the middle overs as Doherty was allowed to bowl his 10 overs for just 28 runs.

Morgan was out in slightly unsavoury circumstances, Christian diving full length off his own bowling to take another catch at grasshopper-kneecap height only for Morgan to stand his ground.

Clarke took the matter up angrily with Jos Buttler and after a TV referral Morgan walked off to some boos. When Chris Jordan was caught skying a pull England had lost five wickets for 48 runs in nine overs, and were saved from total collapse only by some lusty short-arm biffing from Tim Bresnan.

In Australia’s reply Broad was immediately whumped through midwicket and punched past cover as Australia’s openers were able to score comfortably.

Breakthrough
Jordan made the breakthrough as Finch was caught by Bopara at cover. Bresnan entered the attack and was promptly driven straight for an effortless six by Warner as a routine Australia 50 came up in eight overs, followed by Warner’s 50 off 56.

Australia were cruising. Warner was caught at short cover by Bell driving at Stokes and Bopara bowled Clarke with a lovely ball that nipped back.

But an elegant innings of 71 from Shaun Marsh took Australia to the series victory . –
Guardian Service