Conlan and Barnes through to Commonwealth semifinals 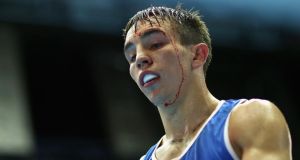 Michael Conlan has won a place in the Commonwealth Games semifinal. The Irishman had to be careful against Uganda’s Bashir Nasir after getting cut in his first fight in an accidental clash of heads. Photograph: Richard Heathcote/Getty Images

Conlan, the 22-year-old Olympic and European bantamweight medallist, won all three rounds comfortably against Uganda’s Bashir Nasir, an aggressive and smaller opponent, in the first quarterfinal bout of the day.

Conlan had already eased past his first two opponents in Glasgow and although Nasir was dangerous and lunging from the beginning, Conlan kept out of trouble and was able to largely control the fight from a distance.

Already cut after a clash of heads in his first bout, the last thing he could afford was a fresh injury facing into a semifinal and with Bashir occasionally crashing forward, there was always the chance of another accidental clash of heads.

Conlan won all three rounds 10:9, the second three minutes less frenetic as the Irishman switched from orthodox to southpaw, confounding his opponent.

In the third round Conlan tagged the 20-year-old Nasir a few more times as he opened up, safe that the fight was under his control and largely won.

“I had to be very careful in there. I’ve been cut already and he was very, very dangerous,” said Conlan after the fight.

He now faces Welshman Sean McGoldrick for a place in the final.

Barnes’s win over Papua New Guinea’s Charles Keama was more emphatic, the light-flyweight forcing four standing counts before the referee stopped the bout 56 seconds from the end of the third and final round.

Barnes was always in control, landing two big right hands through his opponent’s porous defence in a first round the judges scored 10:9 in his favour.

In the second round, Barnes worked the body of Keama before another big right prompted the first standing count of the bout and the second followed soon afterwards thanks to a flurry of blows landed in the corner.

Leading 20:17 going into the third, Barnes kept his defence tight but popped up to land that right hand again as the referee stepped in for a third time, before his final intervention called an end to a lopsided contest.

1 Game Changers: Living beyond fear puts Alex Honnold above all others
2 Alain Rolland to step down from World Rugby position
3 Georgia and Fiji in line to join Six Nations sides in eight-team tournament
4 Gerry Thornley: Munster will make for interesting case study when rugby resumes
5 CVC cuts Six Nations offer by half to €165m as talks continue on new deal
Real news has value SUBSCRIBE