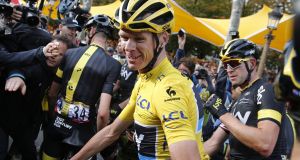 Chris Froome has released his physiological data in an attempt to answer his fiercest critics, but knows he is the only person who can say his performances are 100 per cent clean. Photo: Martin Rickett/PA Wire

Chris Froome hopes releasing his physiological data can help to rebuild trust in cycling, a sport bedevilled by doping scandals.

Froome issued a statement on Friday, saying: “I am realistic and recognise that these results will not convince everyone.

“The deceit of the past still casts its shadow over the present, but my hope is that more transparency like this can be another small step in helping rebuild trust in the sport I love.”

The two-time Tour de France winner’s performances in independent laboratory tests were at the upper limits for humans, scientists reported.

That conclusion is not a surprise, given Froome has twice won the toughest endurance event in sport, yet it may not be enough to answer his detractors, whose cynicism stems from years of performance-enhancing drug use in cycling.

“The results today hopefully tell their own story,” Froome added.

“The figures make one thing very clear to me — if I ever needed any reminder. Natural ability is only one piece of the puzzle of what it takes to win an event like the Tour de France.

“I have always prided myself on my work ethic, dedication and perseverance but without the opportunities and support from Team Sky and Team GB I would not be where I am today.

“Team Sky’s belief in my ability, structured coaching and attention to detail have given me the platform to maximise my potential.

“I am proud to ride for a team that has shown that you can win the biggest bike races in the world clean.”

In July, Froome was subject to innuendo and scrutiny, doused with urine and called a doper in claiming a second Tour yellow jersey.

Froome’s Team Sky squad released performance data during the Tour, relating to the commanding win on stage 10 to La Pierre Saint Martin, in a bid to quell suspicion, but his critics would not be convinced after previously being duped by the likes of Lance Armstrong.

The Kenya-born Briton agreed to undergo independent testing and, in addition to the Esquire article, a separate scientific paper is also to be published.

Froome’s VO2 max — the maximum volume of oxygen that an athlete can use, measured in millilitres per kilogramme of body weight per minute (ml/kg/min) — was recorded as 84.6. At his Tour-winning weight it would correlate to 88.2, according to Esquire.

The general population has a VO2 max of 35 to 40, with highly trained individuals in the 50s and 60s.

A few athletes have been measured in the 90s, including three-time Tour winner Greg LeMond.

Phillip Bell, a senior sports scientist at GSK, told Esquire: “Froome’s values are close to what we believe are the upper limits for VO2 peak in humans.”

Froome’s peak power and sustained power, which he should be able to manage for a period of 20 to 40 minutes, was also measured, at 525 watts and 419 watts, respectively.

Froome told Esquire: “I’m the only one who can really say 100 per cent that I’m clean.

“I haven’t broken the rules. I haven’t cheated. I haven’t taken any secret substance that isn’t known of yet.

“I know my results will stand the test of time, that 10, 15 years down the line people won’t say, ‘Ah, so that was his secret.‘ There isn’t a secret.”

The figures were similar to those attained early in his career, during testing in Lausanne, Switzerland on July 25, 2007, whilst Froome was training at the UCI’s headquarters, suggesting his physical capability has always been present.

He described the process as “a journey of discovery”.

Froome, whose wife Michelle is due to give birth to the couple’s first child this month, is already looking to the future and the summer of 2016, where he will be targeting a Tour and Olympics double.

He said: “I can’t wait to start racing next year, to challenge for a third Tour de France title and, hopefully, to ride for Team GB in Rio 2016.”