Cavendish remains at centre of controversy 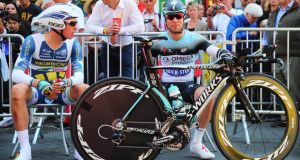 The world time trial champion completed the 33km course to Mont-Saint-Michel in a time of 36 minutes 29 seconds to sit 39 seconds ahead of the second-best time, set by Vaconsoleil’s Thomas De Gendt.

Points classification leader Peter Sagan was eighth best among the early riders, one minute 31 seconds down on Martin, but only one second ahead of veteran Scot David Millar in ninth.

Chris Froome was hoping to use today’s time trial to strengthen his grip on the yellow jersey, as he leads Alejandro Valverde by one minute and 25 seconds in the general classification.

Although he does not tackle the course until last, plenty of his Team Sky team-mates set strong times by mid-afternoon.

Kanstantin Siutsou was the best placed of them, two minutes and 39 seconds down on Martin, while Edvald Boasson Hagen was 3’27 back.

Geraint Thomas and Ian Stannard were bunched together a further 11 and 13 seconds back respectively.

Mark Cavendish continued to be the centre of controversy after his clash in Saint-Malo last night, with an Omega Pharma-Quick Step team-mate reporting the British national champion had been sprayed with urine by spectators on the course.

Cavendish was blamed by many fans for a crash in the final 100 metres of yesterday’s stage 10 which sent Tom Veelers crashing to the ground, although he was cleared by race officials.

This morning, French team-mate Jerome Pineau reported that the reaction had escalated. “Yesterday I was so proud to see the support at the race but today I am ashamed,” he wrote on Twitter.

“Ashamed when my friend MarkCavendish tells me he has been whistled and even sprayed with urine on the course. It’s scandalous.”

Cavendish declined to talk when asked about the incident, but another member of team staff said with a grin that there had “been a smell” when the Manxman returned to their bus.