Brian O’Connor: Novak Djokovic not a winner in the popularity stakes

While he can beat anyone at tennis, the lack of public affection for the Serb is a mystery 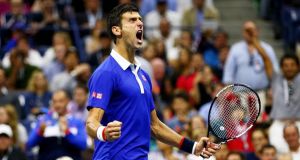 Novak Djokovic: “He is believed to be a perfectly pleasant character away from the court, bright, multilingual and a family man.” Photograph: Clive Brunskill/Getty Images

It has been quite touching really, this furrowed focus on why, despite securing a 10th Grand Slam title by once again beating Roger Federer in the US Open final, Novak Djokovic still isn’t much liked by a lot of people.

Everybody might love a winner but plenty it seems are prepared to make an exception for “The Djoker”.

Various explanations for this have been suggested, from his haircut to geo-political pronouncements on the prejudice eastern European males face when it comes to that love that dares to shout its name: corporate sponsorship.

It is true Serbia doesn’t often feature in polls as people’s second favourite country. We’re talking Belgrade here, not Brazil and no one hears samba when they think Serb.

There is a danger though in over-complicating this. Maybe there are sociological reasons floating around but it is just as likely because Djokovic can quite often come across as a bit of ‘Djick’.

That chest-thumping, shirt-ripping schtick got old very quickly, though not as fast mind you as his capacity to recover from hobbling around the court like he’s just had his leg released from a bear-trap only to miraculously pounce like a gluten-free hawk on anything short.

All of which makes the logic of who does and doesn’t become a tennis darling as baffling as it is reassuring; because thankfully it clearly isn’t just about slavishly siding with the winner.

In his pomp Federer was all but in a different league to everyone else and still had audiences swooning. Now he’s the classic old-champ-looking-for-a-final-hurrah and the love practically oozes on court.

So it’s too easy to say Djokovic’s problem when it comes to crowd support is that he simply isn’t the sanctified Swiss. Or that his dominance is such he is always destined to be guy in the black hat. Andre Agassi never had that problem and neither did Boris Becker.

It is fascinating though why some sporting greats get enthusiastically clasped to the popular bosom and others don’t. Why is Jamie Heaslip left to suckle on respect while Paul O’Connell slurps to bursting on rugby’s manly love-boob?

Damien Duff risks death by cuddle every time he goes outside the front door, yet his pal Robbie Keane is regarded a lot more leerily.

It’s not a media creation thing, nor is it the result of some intuitive sideline instinct for goodness. Doing this gig I have had the misfortune to encounter more than a few malevolent back-stabbing shysters in possession of public reputations entirely at odds with the skeevy reality.

In fact, he is believed to be a perfectly pleasant character away from the court, bright, multilingual and a family man who has made sure not to forget where he came from.

He’s also sensitive enough and proud enough about the popularity thing that he tries very hard to overcome it, which may actually be part of the problem.

A lifetime of supreme willpower has gone into turning himself into a tennis winning machine and it must be very difficult for Djokovic not to believe he can bend that will towards any task.

But in the fatty, gluten-saturated, hopelessly illogical real world, one thing guaranteed to turn people off is trying too hard. The Serb clearly craves a crowd cuddle as much as that elusive French Open, and that neediness keeps getting flung back in his face like a pissy patisserie.

At this stage, the harder Djokovic tries to present himself as humble, sincere and generous, the more it can seem like that effort has been sieved through any amount of PR-advised calculation; and even if it hasn’t been, the perception it might be still exists.

As problems go, this does have to kept in perspective. With a reputed $120 million tucked away, any longing for love takes place in luxury, even if it must nag him that Federer is supposedly worth more than twice that on the back of years of global approbation.

For instance, when Lester Piggott quite plainly didn’t give a fiddler’s about what anyone thought of him, you knew it was sincere.

However, even if such mammoth self-containment is impossible for everyone, Djokovic can always fall back on time.

Hang in there long enough and familiarity alone usually works. Who would have thought 30 years later that McEnroe rather than Borg would have achieved “international treasure” status? It’s like dangerous, druggy Keith Richards trumping uber-calculated Mick Jagger. And the reason? Who knows?

People are weird. In fact, they are so weird that maybe a new haircut might even do the trick for Djokovic.