Martin and Deignan prominent, finishing in same time as winner 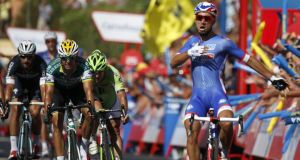 Nacer Bouhanni won stage two of the Vuelta a España in San Fernando in a sprint finish.

The Frenchman was a comfortable winner ahead of Giant-Shimano’s John Degenkolb after an excellent lead-out from his FDJ team, while several riders lost position in the tight corners leading to the finish line.

Degenkolb was catching Bouhanni in the final metres but had left himself too much to do, settling for second with Roberto Ferrari of Lampre-Merida in third place.

All the time gaps among the contenders remained the same, cementing Movistar’s advantage from Saturday’s opening team time trial with Team Sky’s Chris Froome 27 seconds back.

Saturday’s stage had left plenty of surprising time gaps between the general classification contenders, but Sunday’s 174.4km stage was simply about staying safe for the main field while the sprinters eyed glory up ahead.

The usual early break was a six-man group but featured a couple of notable names.

Garmin-Sharp, who had a dismal time trial, sent Nathan Haas up the road, and he led them over the only categorised climb of the day to take the early King of the Mountains jersey, while there was the unusual sight of the No 1 in a break as Lampre-Merida’s Valerio Conti also went off the front.

The pack slowly hauled them back in as the main GC teams made their presence felt at the front of the peloton – Movistar and Sky taking turns as they sought to keep their men safe.

They all stayed together, catching the break with a little under 17km to go and the battle began among the sprint teams to get to the front.

It was FDJ who were on the nose heading into the final two turns, and that was all the advantage Bouhanni needed.