Bolt backing away from ‘saviour’ of the sporting world baggage

After the ‘good versus evil’ showdown last August, Bolt is trying to get back to normal 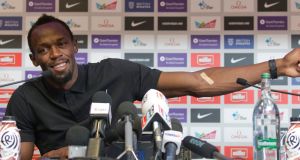 Jamaican sprinter Usain Bolt holds out his arm with a sticking plaster on during a press conference in London ahead of the Anniversary Games. Photo: Justin Talliss/Getty Images

Now might not be the best time to talk about the jinx which apparently comes with making the front cover of Sports Illustrated, although here is a gentle reminder.

Five days after Conor McGregor showed up bare-chested and all on the front cover last March, he was shocked into a second-round submission by Nate Diaz at UFC 196 in Las Vegas.

With that, McGregor joined the fabled list of major sporting acts who seemed jinxed by their front-cover appearance. Tiger Woods, Marian Jones and Serena Williams are among those whose career took a hit after they surfaced in the glossy front colour the magazine does so well.

(On the other hand Michael Jordan holds the record of 50 cover appearances. It never did his career any harm, did it?)

Anyway, it was the first thing to enter my head after tearing open the white airmail envelope to discover Usain Bolt on the cover of this week’s edition, under the caption “The Olympics Will Belong (Again) to the Fastest Human Ever”. Tim Layden’s accompanying 4,000-word feature is a neat teaser of how big a deal it will be if Bolt wins another sprint triple in Rio.

Or, indeed, just how much is riding on Bolt, especially after all that’s unfolded this week, and the further dilution of Olympic credibility, with or without that outright ban on Russia. So the last thing Bolt needs right now is a jinx.

True, he has been on the front cover twice before, though both were after he had rewritten the record books (at the 2009 World Championships in Berlin) and Olympic history (by winning the sprint triple in London 2012).

It’s a little unfair to suggest that Rio will “belong” to one man. Of all of the absurd expectations placed on Bolt, it was the idea that he went into last summer’s World Championships in Beijing as the man to save the sport of athletics. Now it seems he is the one man who can save not just athletics (again), but perhaps sport itself – at least when it comes to the Olympics.

There was an almost obscene amount riding on a race of just 100m, taking just over 40 strides and lasting just under 10 seconds. It’s hard to imagine what the reaction would have been had Gatlin won, the American nearly 10 years on from committing a second doping offence, and infamously getting faster all the time.

But Bolt did win it (by a mere .01 of a second), thereby temporarily saving the sport and bringing a sort of salvation from the needle. It’s taken some battering in the 12 months since. The fact Gatlin will be in Rio for another crack at Bolt doesn’t help, and there’s nothing to suggest it won’t be just as close this time, or even that the result could be reversed.

Asked earlier this week about whether the entire Russian team should be banned from Rio, Bolt was somewhat hesitant.

“That’s a tricky question. I don’t stress about these things. I leave it up to the big heads to make this decision. These are sideshows. And if you get caught up in these things as athletes then you lose focus of the goal in hand. I have to focus on me going there and defending my titles.”

Bolt did give a thumbs up to the banning of Russia’s track and field athletes. “This will scare a lot of people and send a strong message that the sport is serious about cleaning up”. Still, part of his hesitation to call for an outright ban might have to do with Jamaica’s own anti-doping record, particularly the gaping absence of out-of- competition testing in the months prior to the London Olympics, which resulted in the resignation of their anti-doping chief.

Still, it would place the first small asterisk next to the otherwise unblemished record of Bolt, not at any individual level, obviously, but a small tainting of one achievement nonetheless. Bolt described news of Carter’s positive as “heartbreaking”, and understandably so, given they were part of the same relay quartet at five major championships.

What Bolt has going for him more than any other world-beating sprinter of his generation is his squeaky-clean doping record. Every other sprinter who has run 9.79 seconds or faster has a doping offence in their past. We mean you Gatlin, Powell, Tyson Gay and Yohan Blake.

Assuming Bolt does make it to the starting line in Rio, his major championship credentials are almost as equally unblemished: with the sole exception of the 2011 World Championships in Daegu (where he false-started in the 100m), he has consistently delivered his season’s best in the final. He has now won 40 of his 44 major 100m races since the start of 2008, and his 200m record in major finals now stands at 27-1.

Not that Bolt is comfortable with being the saviour of athletics: “People say I need to win for my sport. There are a lot of other athletes out there running clean and that have run clean throughout their careers. It’s not only on me because I can’t do it by myself. It’s the responsibility of all the athletes to help to save the sport, to show the sport can go forwards.”

All of which sounds like an athlete being very careful not to jinx himself in any way by saying anything otherwise. Doesn’t it?