Still unbeaten, they will be confident of reaching Sunday’s final of the IHL 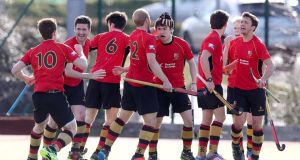 It’s been a perfect season for Banbridge so far this year. Photo: Ryan Byrne/Inpho

Banbridge lie two wins away from a perfect season as they look to add the Irish Hockey League title to the Irish Senior Cup they won a fortnight ago as well an Ulster treble.

They have yet to lose in any competition this season and they will be confident of reaching Sunday’s final of the IHL as they meet Pembroke, a side they beat 4-0 in the Senior Cup, in tomorrow’s semi-final at 3pm.

Their opposition will hope that goalkeeper Mark Ingram will be back in the mix after being stretchered off the last time the two clubs met with a head injury.

The other semi-final pits reigning champions Monkstown against Three Rock Rovers in a repeat of last year’s battle at the same stage.

Town shaded that one in extra time and will be buoyed by the return of Swiss star Fabian Wullschleger after international duty at the indoor World Cup and the World League.

It looks set to be the final season of the IHL in this current format, meanwhile, as next year’s expanded version of the event took a big step closer to being realised this week.

Ulster clubs Lisnagarvey, Banbridge, Annadale and Cookstown have all accepted invitations to the expanded version of the competition.

A recent Ulster Hockey special general meeting had voted for the province not to support the new season-long league that will see the top clubs move out of the provincial leagues. Despite this, all four clubs have accepted the IHA’s invitation in “good faith”.

Monkstown, Glenanne, Pembroke, Three Rock Rovers and Cork C of I are the other clubs to have accepted invitations to the new league while the tenth spot will go to UCC, Railway Union or Instonians.