Australia in control after slow opening day in Durham 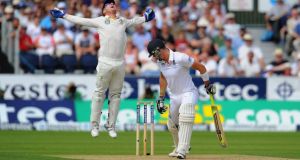 England captain Alastair Cook’s decision to bat first was undone by poor shot selection as England narrowly avoided being bowled out on the opening day of the fourth Test against Australia at Chester-le-Street.

On a slow surface England were unable to match the watchful exhibition Cook initially provided to be 238 for nine at stumps.

Cook was the only batsman to reach a half-century as he determinedly ground out 51 from 164 balls.

But while he fell to the ball of the day, a Jackson Bird leg-cutter that caught the captain in front without playing a shot, England too regularly contributed to their own downfall.

Ian Bell, Stuart Broad and Graeme Swann’s dismissals were the most glaringly preventable, each recklessly picking out fielders, while Jonny Bairstow and Matt Prior both fell lbw after they almost ground to a halt in the evening session.

The pair took 19 overs to add 34 runs for the sixth wicket, with Bairstow falling when he swept at Nathan Lyon just moments after breaking a 65-minute drought between runs.

Off-spinner Lyon was the pick of the Australia bowling as he intelligently used the angle from around the wicket, in the absence of much turn, to prise out figures of four for 42.

Australia’s seamers were otherwise metronomic, on a day 29 maidens were bowled, as they patiently made their inroads after Cook and Jonathan Trott (49) had helped England to 106 for one.

England lost 93 for seven thereafter, although on a slow outfield and tricky surface – in which 267 remains the highest first-innings score in the County Championship this season – it did not obviously loom as a match-damaging day.