Annalise Murphy bounces back from her Olympic disappointment in thrilling style 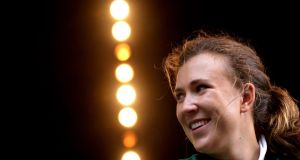 Irish Times/Irish Sports Council Sportswoman of the Month – May 2013

Almost a year on from that day Annalise Murphy suffered the heartbreak of finishing fourth at the Olympic Games, having won the opening four races in the Laser Radial sailing class, it’s still hard not to marvel at her reaction in an interview with RTÉ immediately after the ordeal.

Already thinking about Rio 2016, a whole four years away, even while she was wiping away the tears from her London 2012 experience?

But such resilience and resolve is a common theme among all our sportswomen of the month so far this year.

Fionnuala Britton, for example, just missed out on a bronze medal at the 2010 European Cross Country Championships, given the same time as the runner in third – and went on to win the race the next two years.

Fiona Coghlan had endured tough days in her time with the Irish rugby team, hidings that would sap the enthusiasm from most, and went on to captain them to their 2013 Six Nations Grand Slam.

Aisling Blake had lost too-many-to-count national squash finals to her international team-mate Madeline Perry, but at 31 finally won her first Irish title by beating her nemesis in March.

And, last month, the award went to jockey Jane Mangan who suffered a bizarre misfortune at Cheltenham when she led after clearing the final fence in the Foxhunter Chase, only for her horse to unseat her after getting confused by where a groundsman had tied a tape.

Lesser mortals might have been tempted to throw in the jockeying towel, but not long after the gifted teenager from Conna, Co Cork had her first Grade One winner when she rode The Liquidator to victory in the Champion Bumper at Punchestown. “What dreams are made of,” she said.

That’s the common denominator, then, Murphy rebounding in some style from London 2012 after training through the winter, winning gold at the first round of the sailing World Cup in Lake Garda in early May, and taking gold again in round two in Medemblik, Netherlands.

Before then, though, there’s many a major event, not least the Laser European Championships in Dun Laoghaire in September. You’d imagine she wouldn’t be looking that far ahead, but if she was thinking of 2016 in 2012, she probably is.