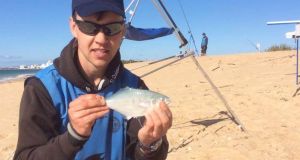 Dean Quigley, Kilmore SAC and captain of the Irish team, with a sea bream at the world championships in Portugal 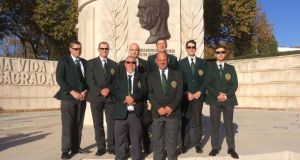 The Irish shore team which finished in bronze position at the world championships in the Algarve, Portugal

A recent proposal from the EU Fisheries Commission on bass management across northern Europe calls for a complete angling ban in Ireland from next month until July 1st and a one fish bag limit for the remainder of the year.

If adopted, the stringent measures will include a fishing ban for commercial vessels and recreational anglers for the first six months starting next month. For the second half of 2016, the commission is seeking a monthly one-tonne catch limit for vessels and a one fish bag limit for anglers. It is also proposing to maintain the closure of commercial fishing around Ireland.

“Along with other angling organisations across Europe,” angling guide John Quinlan says, “I will be lobbying to have the proposal changed to allow us to at least be able to fish catch and release. Otherwise, it will effectively close down businesses like mine from January until 1st July.”

Congrats to the Irish Federation of Sea Anglers (Ifsa) shore team who finished in a commendable bronze medal position following the 32nd world shore angling championships in Loulé, Algarve, Portugal, last week. Against a field of 17 nations over four days, this podium finish will stand in good stead for next year’s championships to be held in Wexford.

Ireland is fast building an international reputation, adding this latest bronze to a gold medal performance in South Africa in 2010 and bronze in the Netherlands in 2012.

“The importance of this result cannot be overstated,” Ifsa chairman Michael Quinn says. “It shows that Ireland’s anglers are among the best in the world.”

Continuing a synopsis of the recent Salmon Watch Ireland conference in Dublin, chairman, Niall Greene in his introductory remarks,

says that what is new, particularly in the past 15 years, is the increased scientific interest in the impact of stocking and the analysis of those impacts.

The outcome of that research and analysis has been somewhat controversial in angling circles. A conference in Glasgow in 2012 spent two days on this subject and heard at least 20 presentations, interspersed by a number of case studies by people managing restocking programmes. He says we had no case studies, which is a pity.

Dr Millane of Inland Fisheries Ireland (IFI) presented a comprehensive analysis of the intricacies involved in hatchery licensing and regulations. In general, salmon rivers are moving away from hatcheries towards river enhancement. Unfortunately, he said, the cost was enormous.

An example of club members rolling up their sleeves and working on river rehabilitation (with financial assistance from the IFI), was offered by representatives from Trim and Athboy Anglers on the Trimblestown River, a tributary of the Boyne.

Swirl will be producing a comprehensive report outlining its interpretation of the presentations at the conference.

PS: A reference to Dr Solomon’s presentation in last week’s column should have read: “I expect there are salmon spawning in more rivers in the British Isles now than there have been any time in the past 200 years.”

Irish actor Peter Gowen, currently appearing in Through a Glass Darkly at the Project Arts Centre, took time out recently for an evening of sea fishing on the Blackwater estuary. “I had great fishing, landing three cod, each over 3.2kg [7lb+] on a Pennel rig with peeler crab,” he said. angling@irishtimes.com