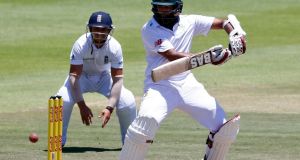 If the first Test in Abu Dhabi a couple of months ago taught us anything it is that when it comes to the fifth day of a seemingly dead match, nothing should be taken for granted. By the time stumps are drawn on the final day, this second Test should have been long over.

Once England had racked up 629 for six, there was, in theory, little for South Africa to do beyond batting to save the game, and, through the immense diligence of the captain Hashim Amla, that much they have done. Amla compiled the fourth double century of his career over more than 11 and three-quarter hours – with the assistance of AB de Villiers, Faf du Plessis, and, delightfully, in the latter part of the day Temba Bavuma, with his maiden Test hundred, and Chris Morris (69).

Then though, unlikely as it should be, comes the doomsday scenario that will always haunt England and their supporters, the Adelaide spectre, for having made much of the running in the match it is they who are the only side that can lose, hoist, in a way, on the petard of their own heady first innings run-rate.

In the event they faced six, which Alastair Cook (eight not out) and Alex Hales(five not out) survived without alarm, England reaching 16 without loss, a lead of 18.

The success of Bavuma is a heartening one. The 25-year-old was born in Langa, a township outside Cape Town, and is the first black player to be selected for his country as a frontline batsman. .

Watch him closely and you will see someone rock-steady at the crease, with no trigger movements, but perfectly balanced: in defence, he gets his nose right over the ball. He looks a batsman. Clearly he is an excellent judge of length as all small batsmen must be, and he is strong on the back foot, particularly when it comes to pulling the pacemen and forcing them away on the offside.

Bavuma drove the ball beautifully from pace and spin alike, hitting 16 fours in his unbeaten 102 from 148 balls.

What a strange innings this had been for South Africa though. For the first 163 overs of it, three wickets had fallen, of which one was a run-out.

That England then, armed with the third new ball, took three more in the space of four overs for 10 runs, tells as much as anything about the ball itself and the manner in which it fails to maintain its hardness beyond the first 15 to 20 overs. When, with the third new ball, Stokes sent a bouncer soaring over Jonny Bairstow’s head, it had not pitched on a moribund surface.

Amla had faced 476 deliveries without being dismissed before pushing forward at the next, from Stuart Broad, and sending a thin inside edge on to his stumps. But Amla’s was an immense effort from a man under pressure as leader and batsman. His double century, reached just before lunch, included 27 fours.

At this point, his partnership for the fourth wicket with Du Plessis, was worth 171, following that of 183 for the previous wicket with De Villiers. But then Du Plessis, who had batted for five and a half hours in making 86 runs, followed in the next over, edging Jimmy Anderson, round the wicket, to gully where Stokes took a low catch well. Three overs later, and a third wicket had fallen, that of the keeper Quinton de Kock, wh , a tried to take on Broad’s bouncer but mistimed it instead straight to Anderson at backward square leg.

It was the last success England were to have until deep into the final session, when Morris drove Steven Finn to Joe Root at short extra cover. Guardian Service

1 Keith Duggan: Through the glories and the disgraces, we were all Maradona addicts
2 GAA Statistics: Can Cavan and Thomas Galligan beat Dublin with the long kickout?
3 Rugby Stats: Blame game at lineout time is on the whole team
4 Andy Farrell to delve deeper into Irish squad for team to play Georgia
5 All bets are on as America opens the gambling sluice gates and the dollars flow
Real news has value SUBSCRIBE