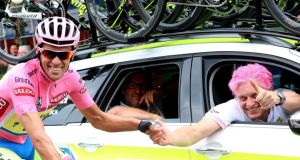 Alberto Contador enhanced his status as one of the greatest grand tour riders when the Spaniard clinched his second Giro d’Italia title on Sunday after finishing safely in the bunch in the final stage won by Belgian Iljo Keisse.

The Tinkoff-Saxo leader, who won the three-week race for the first time in 2008, became the second rider after Frenchman Bernard Hinault to have won the three grand tours (Tour de France, Giro, Vuelta) at least twice.

His seventh title also takes him up to fourth place in the list of the all-time grand tour winners behind Eddy Merckx (11), Hinault (10) and Jacques Anquetil (8), and level with Miguel Indurain and Fausto Coppi.

Contador, who lost his 2010 Tour and 2011 Giro titles after a positive dope test, will now attempt to become the first rider since the late Marco Pantani in 1998 to achieve the Giro/Tour double.

The competition, however, will be fierce as most of the Tour de France pretenders were not competing in the Giro – Chris Froome, Nairo Quintana, Vincenzo Nibali, Thibaut Pinot having opted to solely focus on the world’s greatest stage race.

Contador finished the Giro one minute 53 seconds ahead of up-and-coming Italian Fabio Aru, who took every opportunity with a strong Astana team to attack the Spaniard.

A 59.4-km flat time trial, however eventually cost him dearly and Contador hung on for dear life in the final mountain stage in Saturday after both riders, and Astana’s Mikel Landa – third overall 3:05 off the pace – traded blows throughout.

Contador often found himself isolated against Astana in the mountain stages but the Spaniard lived up to his reputation as being a tough nut to crack, notably when he countered Aru in the 16th stage after being attacked by Astana as he suffered a mechanical before the climb up to the punishing Mortirolo.

Landa prevailed on that day but it signalled the end of Aru’s ambition of overall victory.

Contador now heads to a rest period before taking part in the Route du Sud from June 18th-21st and the Tour de France, which starts from Utrecht, Netherlands, on July 4th.