Aisling Daly: ‘I want to make the sport better for everybody’ 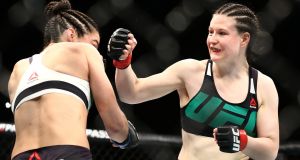 Almost a year has passed since Aisling Daly’s victory at UFC Dublin. She had designs on getting back in the octagon since then but the intervention of injuries and other issues have put those plans on ice.

It’s the longest stretch of competitive inactivity in her MMA career but it hasn’t deterred her fighting ambitions.

Even the idea of fighting Joanna Jedrzejczyk for the UFC Strawweight belt remains a real prospect. But, in the recesses of her mind, the 28-year-old is reflecting on the cumulative damage the sport has done to her body over the years and contemplating its impact on her future.

“I’m getting a bit older,” she begins “and I need to start thinking about my life long-term and not just my MMA career because it’s at the point where I’m doing damage to my body. Realistically, as a fighter you only have a certain kind of lifespan.

“If I decide to retire when I’m 32, I don’t want to be someone who has a dodgy knee or a dodgy back and not be able to play with my kids. Fighting is only a small part of your life and I don’t want to wreck it so that I don’t have any quality of life after I’m retired.”

While she appreciates that she is entering the winter of her career, the desire to perform still burns brightly in Daly.

After UFC Dublin, Daly was eager to get on the London card in February of this year. But after making enquiries, she was inexplicably told that no female fighters were going to be considered for it.

“I sent them an email” she says in frustration “asking to be put on the card and they just said no. I thought it was ridiculous; that annoyed me. It was the first time I got an answer saying they weren’t putting females on the card. I didn’t think they picked fights like that.”

She then submitted a request to be added to the Zagreb card a few months later but was also denied. Four weeks out from the event she was offered a place but was unable to accept, as it would mean a drastic weight cut in order to make 115Ibs.

For most of her career, Daly fought at 125Ib but in order to graduate into the UFC franchise, she had to make a choice between 115Ib (strawweight) or 135Ib (bantamweight). To go for the latter would mean fighting against naturally bigger women thereby exposing herself to a higher threat of injury.

In order to maximise her chance of winning, she opted for the strawweight category and the weight-cutting complications that came with it. Unsurprisingly, the purge involved in that process left its mark.

She drafted in champion kickboxer Lyndsey Doyle to give her some nutritional guidance. And while the new regime revitalised Daly as a competitor, it also prioritised her long-term health ahead of her short-term goals in sport.

“Lindsey is always reminding me about life after fighting. She’ll say ‘we can do this to get you on weight but this is going to have a negative impact on your health’ but she always leaves the final choice to me.”

UFC 93 at Hamburg last month was Daly’s next opportunity to compete but weeks out from the fight, she suffered a serious knee injury. She was told it was akin to something that ‘people get in car crashes when they jolt forward and their knees hit the dashboard’.

“It happened when I was doing jiu jitsu,” she says “and I was fighting to keep my balance so when I did eventually land, I landed really hard on my right knee and I just thought it was an impact injury.

“I kept training on it for weeks after because I had the fight booked at UFC Hamburg. Then I was coaching a kids jiu jitsu class and we were playing a game and I tripped over one of the kids and my knee completely locked up. I couldn’t move it and I was in a lot of pain.”

There was a time when injuries never really burdened ‘Ais The Bash,’ but in recent years, her body has lost some of its resilience and the injury count has swelled. She points to dated training methods as a possible contributory factor for that.

“I remember years ago one middleweight guy knocked me out with a kick in a sparring session so I would have done a lot of damage even before the UFC was around.”

She adds: “As I’ve gotten older, I’ve noticed I’m getting injured that bit easier. Up until my mid-20s I probably never had any serious injuries, now it’s a case of I’ve done both knees, I’ve injured my collarbone and broken my nose. Everything is kind of accumulating so I’m just not in any rush to get back into the next fight until I’m 100 per cent.”

The UFC is in a state of transition at the moment. In addition to the unprecedented $4 billion sale of the company earlier this year, the last few months has also witnessed the formation of the Professional Fighters Association (PFA) which aims to act as a union for the UFC fighters.

Daly has not received one additional cent from the company during her recent enforced absence. This is an issue that affects a large cohort of UFC fighters and Daly would like to see the union strive for a better distribution of the sport’s wealth.

“All my financial stuff comes from coaching and private lessons. The UFC doesn’t pay us any kind of retainer outside of fight time so I haven’t got paid by the UFC since I fought in Dublin last year. If I was relying on that, how would I be living?”

The improvements Aisling Daly is looking for are not just for herself. She’s thinking about the next generation and what can be done to preserve MMA for them. Daly’s contribution so far consists of collaborating with Professor Dan Healy of Beaumont Hospital to establish SafeMMA Ireland, in order help educate people about safe practices in the sport. She’s also campaigned to get MMA regulated in Ireland, although that still has some detractors to overcome.

Ultimately, Daly wants the sport to evolve and she has a real vision for how that can be achieved.

“I’d like to see weight cuts down to a minimum because the real dangers lie in what people are going through in the dehydration phase. It’s not so much the diet, it’s the last 24 hours when people aren’t drinking, they’re getting into saunas and hot baths . . . I’d like that monitored to the point where people aren’t cutting any water weight.”

“I want to make the sport better for everybody that comes after me and make sure that the risk is minimal because it is a dangerous sport.”