An Irish Triple Crown jersey from 1899 is to go under the hammer at Whyte's auction. Also at auction is a football signed by Manchester United's 'Busby Babes' just months before the Munich air disaster. For more information visit Whytes.ie 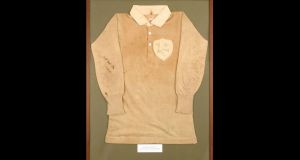 The Ireland jersey was worn by William (Billy) Grant Byron in 1899, the year of Ireland’s second Triple Crown victory. It is reputed to be the oldest international rugby jersey in the world. 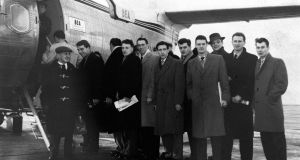 Manchester Utd ahead of the ill-fated flight in 1958. Photograph: Popperfoto/Getty Images 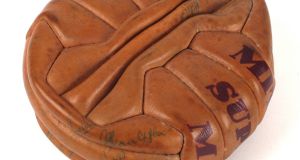 The ball signed by the 1957 Manchester United side managed by Matt Busby. 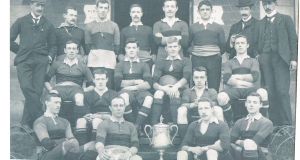 What has been described as “the oldest international rugby jersey in the world”, and a football signed by some of Manchester United’s ill-fated “Busby Babes”, are to go on sale next month.

The Ireland jersey was worn by William (Billy) Grant Byron in 1899, the year of Ireland’s second Triple Crown victory – a feat not repeated until 1948.

Born in Derry in 1876, Byron served as an officer in the Royal Irish Rifles in the first World War and won 11 caps for Ireland.

The jersey has a pre-auction estimate of €25,000-€35,000, while the football has an estimate of €6,000-€8,000.The ball was presented to a member of League of Ireland champions Shamrock Rovers who travelled to England to play Manchester United – managed by Matt Busby – in a European Cup match in October 1957.

In February 1958, seven of the signatories were among the 23 people who died in the Munich air disaster.

Among those who died was Liam (Billy) Whelan, a Dubliner who was Manchester United’s top goal scorer in the 1956-1957 season.

Shamrock Rovers had won the League of Ireland in 1957 and became the first Irish club to qualify for the European Cup, the forerunner of the Champions League. In the first round, the Dublin club hosted Manchester United at home in Milltown for the first leg and lost 6-0. They travelled to Old Trafford for the second leg on October 2nd and lost 3-2.

Stuart Purcell of Whyte’s auctioneers said: “Following the match a member of the team was presented with a football signed by the Manchester United team and management.”

The football and the jersey will go on public view at Whyte’s on Molesworth Street, Dublin 2, ahead of the auction, from December 11th.

3 Ireland v France in doubt due to hotel quarantine policy