Mourinho may move for Maniche 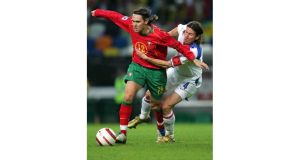 Portugal international Maniche: is understood to be a principal target for Chelsea.

Soccer/ English FA Premiership: Chelsea will look to sign a midfielder in January as cover for Michael Essien during the African Nations' Cup. Jose Mourinho had requested Essien be allowed to travel by private jet between Stamford Bridge and Cairo during the tournament when he met Ghana's coach Ratomir Dujkovic, but the proposal was resisted.

Though Dujkovic is not expected to insist on the 14-day Fifa regulation that could potentially rule Essien out of six Chelsea matches between January 7th and the competition's final, Mourinho is concerned about the disruption the tournament will cause.

"Chelsea suggested Essien could commute during the tournament using their private jet," Dujkovic said last week. "Another option is to allow Essien to stay with them a little bit longer before the tournament starts. Under Fifa regulations we can decide to ban him if he refuses to turn up, but this is not the right thing to do. I believe we can reach an agreement."

Nonetheless, with Essien banned from the two subsequent Champions League fixtures against Barcelona, Chelsea will be forced into the transfer market for a new midfielder. Club sources say they are exploring potential loan opportunities and the Portugal international Maniche is understood to be a principal target.

However, the midfielder, who is unhappy at Dynamo Moscow, where he moved in the close season, also interests Atletico Madrid and Monaco.

The Spanish side have made a £5.5 million bid for Maniche and Chelsea may be forced to compensate Dynamo for the loss of a player for whom they paid Porto a Russian-league record £11 million in May. In Chelsea's favour is that the midfielder is keen to rejoin Mourinho, the coach with whom he picked up a Champions League winner's medal in 2004.

Should the move for Maniche not bear fruit, other options include the Spurs midfielder Pedro Mendes. He is another to have featured under Mourinho at Porto, however he has fallen out of favour at White Hart Lane following the arrival of Edgar Davids last summer.

Meanwhile, Mourinho has warned Hernan Crespo he must share the striking duties over the hectic Christmas schedule despite his beautifully-taken winner against Fulham.

Crespo preserved Chelsea's 100 per cent home record in the Premiership by volleying home a sublime Joe Cole cross in the 74th minute to complete a gripping 3-2 victory. It was a stunning finish which easily eclipsed anything produced by his rival Didier Drogba who came on in the 56th minute.

But Mourinho has told Crespo there is no guarantee he will start tonight's clash with Manchester City as he plans to rotate his two first-choice forwards over the next seven days.

"It was a wonderful goal by Crespo. I felt sorry to take him off but at the time we were playing a crazy system. I wanted to bring Geremi on and keep Didier Drogba there because he was fresh," he said. "I'm very happy with my two strikers. I have in Crespo and Drogba different players and I have to choose the best game for each one of them. But in this period of four matches I'm thinking of rotating them and giving them two games each."

Crespo looked lively and confident against Fulham, in contrast to Shaun Wright-Phillips who was hauled off at the interval following an ineffective first half.

While Dutchman Arjen Robben was causing havoc down the left, Wright-Phillips made little impression before making way for Eidur Gudjohnsen's arrival. The misfiring England winger is operating well below his best but Mourinho has promised he will get another chance to prove himself over the busy festive period.

"There is nothing I can do to give Shaun more confidence. The players have to understand selection is about timings and performances," he said. "He's a good player but he's in a team where he is fighting against Joe Cole, Damien Duff and Arjen for the same position. It's a hard life."