Dual winners for June Sportswoman of the Month after spectacular achievements 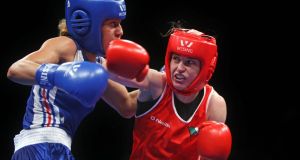 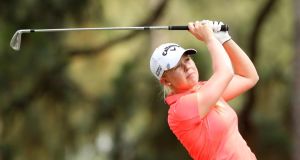 Stephanie Meadow played a major role in the British and Irish team’s Curtis Cup triumph – their first victory over the US since 1996 – and then became the first Irish player to win the British Open Amateur title since 1985. Photograph: Inpho

When Katie Taylor won a record-breaking sixth European title in the first week in June, we reckoned that was our judging job done for the month, it was highly unlikely there’d be a sporting feat to match it. And then along came Stephanie Meadow and her remarkable start to her professional golfing career and we had ourselves our first joint monthly award of the year.

Taylor, a three time winner of our Sportswoman of the Year award, added yet another chapter to her wonderful sporting story, her unanimous victory over Estelle Mossely in Bucharest bringing her gold medal tally to 15 since 2005, the year she last lost a European fight, and making her European, World and Olympic champion all at the same time.

In any other month, Taylor’s team-mate Clare Grace would have been a shoe-in for an award, the Kilkenny fighter becoming only the second Irish woman after Taylor, her inspiration, to win a European Championship medal in the sport.

But Meadow’s dazzling form in June ensured she would collect her second award in two years, the Jordanstown native first making our list in June 2012 after she helped Alabama University win the United States national golf championship, played a major role in the British and Irish team’s Curtis Cup triumph – their first victory over the US since 1996 – and then became the first Irish player to win the British Open Amateur title since 1985.

And then, in her first event on the women’s European Tour, she finished third at the European Masters in Buckinghamshire, before setting off for Southport & Ainsdale where she duly qualified for this week’s British Open – which will only be her third tournament as a professional.

Just imagine what she’ll achieve when she finds her feet in the professional world, as we mention in the feature on her above.

Taylor and Meadow, then, are our joint winners for June, and if anyone can top their feats through the rest of the year, they’ll be doing spectacularly well. Previous monthly winners: December: Madeline Perry (Squash) – The Banbridge squash professional won her 14th national title with a straight games victory over international colleague Laura Mylotte, capping a year that saw her rise again in the world rankings, reaching seventh in the list. January: Gráinne Dwyer (Basketball) – Named “Most Valuable Player” for her performance for Team Montenotte in an outstanding Superleague National Cup final in which they beat the University of Limerick’s Huskies, who were seeking a three-in-a-row, after overtime. February: Niamh Briggs (Rugby) – The 2013 World Player of the Year had another impressive Six Nations campaign for Ireland, the fullback prolific as ever during the team’s spirit attempt to retain their crown. March: Sarah Greene (Hockey) – Greene captained the UCD hockey team to a near perfect season, winning their third successive Leinster division one title, their second Irish Senior Cup in three years, and, for the first time, the big one: the Irish Hockey League. April: Savannah McCarthy (Soccer)– The Listowel teenager, who was the FAI’s 2013 Under-17 International Player of the Year, played a starring role in the Republic of Ireland’s first ever qualification the Under-19 European Championships which starts next week. May: Sanita Puspure (Rowing)– The Cork resident ended Ireland’s eight-year wait for a medal in an Olympic event at a major rowing championships when she took bronze in the single sculls at the European Championships in Serbia.