It’s the Gaelic players’ prerogative to change their circumstances

‘Choice brings responsibility but also freedom, with the most important one in the GAA being the option to opt out’ 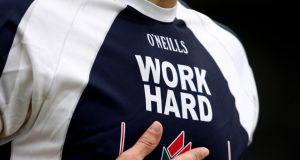 “Focus isn’t enough anymore: instead, near zealotry appears necessary. And if you listen to enough analysis of Gaelic football in particular, talent has become an optional extra when it comes to the demands of inter-county competition.”

It is tough being a modern intercounty player: the instinctive GAA reflex to kneel at the altar of asceticism means the swap between sacrifice and success becomes more ingrained with each season. And it’s tough hearing about it too.

When did everything turn so deadly earnest? Is the unmentionable ‘F’ word now fun? It’s fun to win of course but by definition that joy is confined to a tiny few and there are hundreds of intercounty players flagellating the bejaysus out of themselves seemingly for the hell of it.

The pride taken in this sacrifice, which, we are assured, means lives and careers getting parked 365 days a year, flows throughout the GAA.

It has created the organisation’s bedrock. The idea that the superstar lives next door to you, goes to work the following day like you, recognisably knows the everyday niggles of negotiating everyday life like you, basically might even be you, minus the talent and focus.

But it’s questionable if that’s still the case. Focus isn’t enough anymore: instead, near zealotry appears necessary. And if you listen to enough analysis of Gaelic football in particular, talent has become an optional extra when it comes to the demands of intercounty competition.

It has certainly provoked a cause du jour with interminable debate about the demise of the game’s supposed purity in favour of systematic functionalism: an ever-increasing focus on coaching mystics whose every utterance is fervently analysed in ashrams from Portalington to Poona: even player contracts voluntarily restricting themselves to two grains of white rice and a cup of coconut water a season for kicks.

The picture he painted is hugely self-obsessive. Not eating with friends because he wants the nutrition that fresh and organic food he’s already prepared for himself. Turning up at gyms at six in the morning. Leaving the weddings of his two sisters early due to football commitments. Switching beds in case his girlfriend coming home from work at night might interfere with his sleep pattern.

“Players are losing their lives to this,” Harrison admitted before quickly adding the crucial element to his tale of 60 hours a week sacrificial woe. “But I really want to sign up for this.”

Fair play to him: not everyone has the grace to acknowledge the fundamental reality that in a world where so much arbitrary awfulness collapses on top of the innocent the pressures and impositions freely chosen by amateur athletes are no cause for pity.

Choice brings responsibility but also freedom, with the most important one in the GAA being the option to opt out anytime you like.

That is self-evident. Yet you wouldn’t know it amidst tales of joyless drudgery toiling under the spells of shrieking coaches determined to manipulate the everyday details of young lives in a manner which anywhere else would have these disciplinary freaks invited to do something gynaecological long ago.

How much of it is actually effective must be debatable but what isn’t debatable is that ultimately all of it is about control. And what’s also not debatable is that the ultimate control sits with the very players whose lives are apparently so chaste and boring they make Matt Talbot’s seem dissolute.

If players feel change is required – and most do – then it is up to them to change it.

We’re not talking about logistical miracles for players to insist on positive changes to the make-up of the competitive schedule, or to introduce an off-season that actually means something, or bring in a realistic reimbursement structure that alters the perception they’re being taken for patsys, maybe even develop a code of conduct that restricts the hysterical excesses of the more hysterical coaches.

Except it won’t happen. The players won’t do it, at least not any time soon, which is their prerogative. Just as it is the public’s prerogative to mourn how this sternly obsessive and tactically intricate culture produces games so soporific they can make people weep with boredom.

That’s nothing new. There have always been crap games, although rarely outlined in coaching jargon as ends in themselves. And winning has a happy habit of connecting fans to their team, whatever the quality of display.

But the real long-term threat in all of this is the growing disconnect between players and public. Elite players are now living lives that bear little or no relation to the people watching them, lives that seem more vocation than voluntary, where dogged endurance, sacrifice and a willingness to obey appears far more prized than mere talent.

What reasonable youngster could be blamed for looking at today’s elite players and failing to recognise their reality as anything like theirs, or that it might even be a reality to aspire to. It all looks so dreadfully grim. But it is in player’s power to change that, if they want to. Just as they can opt out, if they want to. And they can keep things just as they are, if they want to. If it’s the latter though, not whinging might be the graceful way to go.