As Sky struggles to find its GAA groove, it is being a little too polite for Irish tastes 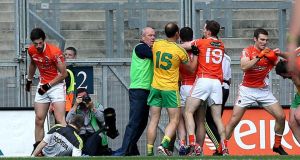 The GAA branch of Sky Sports must be feeling that very little breaking ball has gone their way this season. While they surely expected the initial furore surrounding games being moved to pay per view, they also probably hoped the quality of the matches would help them paper over the PR cracks.

Instead every time they stuck in their thumb they pulled out a prune. Saturday’s Donegal v Armagh clash was one of the few games they have shown this season that was still a contest going down the closing straight, after a slew of one-sided contests in both codes.

That probably means about as many people will watch GAA on Sky as watch the other niche pursuits in the Sky hinterlands such as trout fishing, tractor pulling, that thing with the sliding motorbikes and so on.

The other problem that Sky faced was being viewed as a British company stealing Ireland’s heritage and quite possibly our potatoes. So people were overly sensitive to every perceived slight – and Sky hasn’t helped.

Talking over the playing of the national anthem is a major no-no but even more bizarre are the British Army recruitment ads that reportedly featured at half-time of Donegal v Armagh in Britain.

What was the thinking there? “Are you enjoying watching those Crossmaglen lads play? Well we’ve got the vantage point for you!”

Sky is probably still trying to find its groove, but a lot of its coverage seems to involve one step forward and one back.

Rachel Wyse is a charming presenter and gaining confidence by the week, but the presence of Brian Carney in the studio is baffling. Why is there a need to have an anchor for every pundit? Are they man-marking them?

There’s also a tendency towards politeness that takes a bit of getting used to when we’re used to watching the rough and tumble on RTÉ. For example, when Armagh’s Aaron Findon staged his own version of the flying doctors on Saturday, Senan Connell broke down the incident in a calm and reasoned manner, saying Findon hadn’t covered himself in glory but there also didn’t seem to have been any reason for a doctor to be on the pitch.

Over on RTÉ radio, in stark contrast, tempers flared over the same incident when Joe Brolly seemed to reason that the incident shouldn’t be blown out of proportion because the sport of boxing exists. Or something.

Des Cahill wasn’t having it: “I’m not allowing you trivialise it.” Brolly retorted: “If you put your head in the lion’s mouth, you shouldn’t sort of . . . waggle it about you know.”

Very little of the discussion made sense, but that didn’t stop it being entertaining.

Some of the banter in the Sky studio, however, sounds like it is taking place because there’s a light flashing near them that says: “Mandatory Fun Time.”

Maybe they should sign up Brolly? His first show could open with Wyse punching him on the nose for his “beach babe” jibe and then we’d go from there. It’d be mighty.

The statistics and technology side of things that Sky always promised to bring is working well, with Peter Canavan getting increasingly comfortable at the tactics wall. The possessions counter is one of those ideas that’s so good it now seems blindingly obvious.

Still, all the technology in the world can’t polish a turd. Try as he might on Saturday poor Senan couldn’t avoid admitting that the Dubs were home and hosed at half time. He stopped short of telling people they might as well turn on the golf but you could see he was thinking it.

Cheer up lads. It didn’t bounce for ye this season, but it’s the championship – there’s always next year.