US PGA: Jason Day and Jordan Spieth light up Whistling Straits with birdie-fest

Day takes a two shot lead into the final round but Spieth and Rose, among others, chase 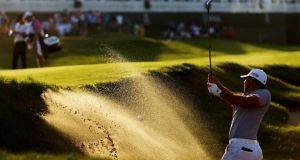 Jason Day of Australia plays a bunker shot on the 15th hole during the third round of the 2015 PGA Championship at Whistling Straits. Photo: Richard Heathcote/Getty Images

Someone lit the fuse, and how. After the thunder and lightning storm of Friday night, Saturday brought us a different kind of fireworks here at Whistling Straits as players took advantage of a soft course and calm conditions to put on a show rarely seen before in any PGA Championship - and, in this 97th edition, Jason Day finished up as the man in pole position.

A symmetric day-by-day improvement saw Day - chasing a maiden Major title - add a third round 66 to the 68 and 67 he had previously posted for a 54-hole total of 201, 15-under. It gave the 27-year-old Australian a two stroke lead over Jordan Spieth, chasing a third Major of the year, heading into Sunday’s final round, with Justin Rose and Branden Grace a shot further back.

Matt Jones, another Australian, had gone into the third round as outright leader but his play, which included playing off the carpet of a hospitality unit on the ninth and also hitting a recovery into railway sleepers on the 17th, was symptomatic of a remarkable day’s golf where the drama took many unexpected turns.

Other twists and turns were of the expected variety, especially that of Spieth - as he has done all year - manoeuvring into a position to contend. The 22-year-old Texan covered the back nine in a mere 30 strokes, featuring six birdies in his final eight holes and three straight to finish, for a 65 for 203, 13-under.

Spieth hasn’t had a bogey in 33 holes, although he conceded that his caddie, Michael Greller, had been a calming influence as the player’s great play tee-to-green wasn’t fully rewarded on a front nine where he performed beautifully but failed with a number of birdie putts. On the run home, though, Spieth leapfrogged up the leaderboard with two hat-tricks of birdies, firstly from the 11th to the 13th and then from the 16th to the 18th, to get into contention to become just the third player to win three Majors in a season. Ben Hogan and Tiger Woods are the only players to have achieved such a feat.

“In the Majors that we’ve won, the putts have fallen on the weekend just strictly by just letting it happen, by giving yourself opportunities, believing that it will fall. ‘Being stubborn on the greens’, is what Michael likes to say. So I (drew) on past Major weekends as a different type of experience than any other experience that you can have. And luckily that hole looks big recently for us on major weekends,” explained Spieth.

Although playing the role of pursuer to Day, and with others in a crowded chasing group, Spieth – winner of the US Masters and US Open already this season – said: “(Sunday) it will be drawing all the positives that we’ve done (this season), when we did win, why did we win, what was there, and how are we going to make it happen again.” A win would also have the fringe benefit of enabling him to usurp Rory McIlroy as world number one.

As it turned out, Day assumed the role of lead character. At one point of his round, Day - who contended at the US Open, in spite of suffering from vertigo at Chambers Bay, and again at the British Open - ran off six successive threes, a run of birdie-birdie-eagle-par-birdie-birdie from the ninth and threatened to run away from the field.

However, a double-bogey six on the 15th, where he took two attempts to escape a greenside bunker, took some steam out of his charge. Day’s response was to birdie the Par 3 17th - rolling in a right-to-left breaking 15-footer - and his 66 for 201 put him into the driving seat.

“I’ve been here before, so I kind of know what to expect. I haven’t won before, so that’s something that is possibly a new experience for me....my confidence level is high, but I’m just more enjoying just being out on the golf course, rather than in previous positions that I’ve had in Major Championships, (which) I’ve viewed them as very stressful,” said Day.

McIlroy shot a 68 for 210, to be nine shots adrift. “In the back of your mind, you still think you have a chance, because that’s what your competitive nature tells you. But if you’re looking at it realistically, I want to go out there (in the final round) and shoot the best score that I’ve shot this week.

“I’ve stood still a little on Thursday and Friday, but definitely improved today and you want to improve on that again tomorrow. If I do that, I think that, as a whole, the week would be somewhat of a success. It wouldn’t be quite what I wanted, but as I said, I can take positives from it and move on.”