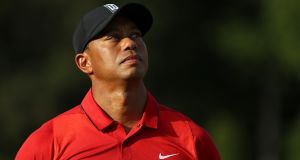 Tiger Woods has announced his competitive return will take place in mid-October, with the 14-times major winner also planning an appearance on the European Tour, at the Turkish Airlines Open in early November. Finally, and with the element of drama so associated with his every move, Tiger is back.

Woods has not played tournament golf since August last year, after which he underwent two back surgeries. He had an operation on the same area in March 2014. After his withdrawal from the sport’s front line, there was much speculation as to whether or not Woods, now 40, would ever appear again.

The man himself dismissed such rumours with a surprise statement on Wednesday. And yet, the timing is no coincidence; Woods will be a vice-captain for the United States Ryder Cup team later this month, during which he would otherwise have faced incessant questions about his future.

Woods is to enter the Safeway Open at the Silverado resort in Napa, California, from 13 October, which serves as the opening event of the 2016-17 PGA Tour season. He then plans to travel to Turkey on 3 November before making a third appearance in as many months at the Hero World Challenge in December.

“My rehabilitation is to the point where I’m comfortable making plans, but I still have work to do,” said Woods. “Whether I can play depends on my continued progress and recovery. My hope is to have my game ready to go. It could be a fun fall.

Hoping to play in Napa, Turkey, and Hero in the Bahamas. Can't wait to compete again. https://t.co/cuNUTQv0NW

“It was difficult missing tournaments that are important to me, but this time I was smart about my recovery and didn’t rush it. It was great spending time with my children Sam and Charlie and also working on a lot of projects including golf course design, the upcoming 20th anniversary of my foundation and my book about the 1997 Masters.

“But I missed competing. I want to thank all the fans for their kindness and concern. I’ve been a pro about 20 years, and their support has never waned.”

Johnny Miller, a two-times major champion and now respected analyst for NBC television, was among the first to react to the news. Miller said: “Silverado is the perfect course for Tiger; straightforward, sort of his kind of course like Torrey Pines. Everybody is pulling for him. It’s going to be quite amazing to have him coming back from this layoff.”

Notah Begay, also now a television pundit and a close friend of Woods, said the pair had worked out a couple of weeks ago. Begay added: “He has modified his training and is doing a lot of core stability work to strengthen the muscles around his back.

“He has been very smart about it. Other times, he might have come back too soon [FROM INJURY]. Expectations are more moderate but I don’t think Tiger will ever settle for just wanting to compete. Tiger’s about winning.”

Yet Jason Day, the world No1 and another Woods ally, played down early hopes. “Even though we’re expecting big things, I won’t expect too much from Tiger,” Day said. “It’s tough to come back and be as sharp straight away.”