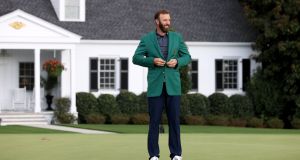 The first Major of 2021 is what’s happening with the 85th Masters set to take place at Augusta National.

Wasn’t the Masters held just a few months ago in November?

It was indeed. The 2020 edition was postponed from its usual April date due to the Covid-19 pandemic and was rescheduled and played last November with Dustin Johnson donning the green jacket for the first time.

When does it start?

The tournament gets underway on Thursday April 8th when the ceremonial tee shots will be hit by six-time winner Jack Nicklaus, three-time winner Gary Player and, for the first time, the first black man ever to compete in the Masters, Lee Elder. Shortly after that, the first competitors will get underway.

What are the tee times?

The Masters is famous for its limited TV coverage and, although it has expanded over the years to now include the front nine, we still don’t get to watch half as much golf as you do at any other Major but that only helps to add to the mystique.

Each day you can follow all of the action on our liveblogs which will get underway around 2pm on Thursday and Friday and take you through all of the day’s play.

At the weekend it will be a slightly later start as the field gets trimmed on Friday night.

In Sky Sport’s early featured group coverage on Thursday you can watch the groups of Brooks Koepka, Bubba Watson and Viktor Hovland at 3.06pm followed by defending champion Dustin Johnson, Lee Westwood and US Amateur champion Tyler Strafaci at 3.30pm.

Friday’s featured groups will be Phil Mickelson, Tommy Fleetwood and Scottie Scheffler at 3.06pm and Adam Scott, Bryson DeChambeau and Max Homa at 3.30pm in the early coverage. In the afternoon wave the featured groups will be Xander Schauffele, Jon Rahm and Rory McIlroy (6.48pm) and Patrick Reed, Daniel Berger and Paul Casey (7pm).

For Eir Sport viewers coverage will begin at 8pm on Eir Sport 1 on all four days.

What Irish players are in the field?

Just the two Irish will compete for the first Major of the year this week, those being Rory McIlroy, who is still chasing a first green jacket and career grand slam, and 2019 British Open champion Shane Lowry who will be hoping to improve on his record of five Masters appearances and three missed cuts.

Who are the favourites?

World number one Dustin Johnson comes into the tournament as the joint-favourite to claim a third Major title and defend the green jacket he won last year. At the rescheduled 2020 tournament in November Johnson cruised to victory to cap off a year which also saw him win the FedEx Cup. Since then his form has been somewhat patchy with a tie for 11th at the Tournament of Champions and a tie for eighth at the Genesis Invitational followed by out of character mediocre showings at the WGC-Workday Championship and the Players before a group stage exit at the WGC Match Play in his final event before the Masters.

Alongside him in the betting is Bryson DeChambeau who has already notched up a win this season at the Arnold Palmer Invitational and will be looking to add a second Major title to his CV while also making up for a disappointing showing last November when he came into Augusta saying that, with his length, the course was playing only about a Par 68.

However, Sunday’s events at TPC San Antonio have certainly thrown the cat among the pigeons after Jordan Spieth – who was without a win since the 2017 British Open – broke that drought to take the Valero Texas Open title and announce himself back in the winner’s circle just a few days before his favourite tournament of the year.

The 2015 Masters champion went through the doldrums since he lifted a third Major title in 2017, coming close to dropping outside the world’s top 100 at one point, but his recent good form with three top-five finishes in his six tournaments previous coming up to the Texas Open showed that there were good signs. His two-shot victory on Sunday very much confirmed that. It’s a testament to just how comfortable he is at Augusta that, even before Sunday’s win, he was one of the favourites to win the Masters. Now with that long-awaited victory in the bag and with a record at Augusta between 2014 and 2018 of tied second, win, tied second, tied 11th, third most will expect him to be right there at the business end of the tournament on Sunday.

Rory McIlroy will, of course, always be one of the main storylines coming into the first Major of the year as he once again bids to win the Masters for the first time and complete the career grand slam. However, question marks aplenty hang over the Northern Irishman this year after a 79 and a 75 at Sawgrass left him at 10 over par and way outside the cutline at the Players Championship before he exited the Match Play with little fanfare after taking a 6 and 5 hammering from Ian Poulter on the first day. McIlroy has recently employed Pete Cowen as his swing coach, largely seen to be a good move, which may help him address some of the weaker spots in his game – his approach play in particular – but how long it takes for the highly-rated English coach to implement his changes is the question. After slipping down to 11th in the world rankings this may be the least expectancy with which McIlroy enters a Masters week since his final nine meltdown in 2011.

Also keep an eye out for Jon Rahm. The Spaniard is fancied by many to win his first Major title at Augusta but he may not have even been teeing it up because his wife Kelly was expecting their first child and he was prepared to leave the tournament at any stage.

However, the news came through at the weekend that the couple’s first child had been born meaning Rahm now rolls into Augusta in much the same vein as Danny Willett did after becoming a father just days earlier in 2016. On that occasion the Englishman headed back to his family a few days later with a green jacket in his suitcase.

Early reports from Augusta are that the course is already playing firm and fast which will set up for a good test and quite a different one to the softer conditions faced last November.

Last week was chilly enough in the area with even a touch of frost some evenings but that’s due to change drastically in the run-up to the event with about 30 degrees and sunshine forecast for each of the practice days.

However, as can often be the case in the south-east, there are forecasts for potential thunderstorms on all four tournament days with Friday currently looking like it could see a fair bit of rainfall while a stiff enough breeze is forecast for Thursday afternoon.

Will there be fans there?

Yes. Last November’s event was a strange experience, particularly on the back nine on Sunday, when there were no roars ringing around the course. This week that will be back although not to the extent of previous years as only a limited attendance will be permitted.