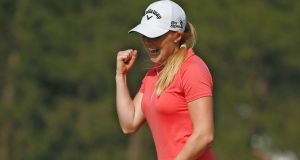 Ireland’s Stephanie Meadow celebrates her birdie on the 18th green as she finished third at the US Women’s Open at Pinehurst in North Carolina. Photograph: Scott Halleran/Getty Images

Stephanie Meadow’s stunning debut third in the professional ranks at the Women’s US Open may surprise many but those who have followed her career closely as an amateur, and the sacrifices she and her family made to further her golfing dream, will appreciate the prodigiously talented 22-year-old.

The Royal Portrush golfer only turned professional last Sunday week in the run-up to the US Women’s Open, played over the Pinehurst No.2 course that hosted the men’s equivalent, where Germany’s Martin Kaymer prevailed, which makes her performance all the more breathtaking.

American Michelle Wie survived a late double bogey to clinch her first Major title with a two-stroke victory over world number one Stacy Lewis, who closed with a four-under-par 66.

Wie made an 18-foot birdie at the par-three 17th to give herself a cushion. She parred the last to shoot 70 and finish at two-under-par 278, while compatriot Lewis claimed second place on 280.

Meadow made a grandstand finish by holing a brilliant birdie putt on the 18th that secured her third spot on her own from South Korea’s Amy Yang, whose birdie on the final hole made up for a four-over-par final round of 74.

Meadow doesn’t have an agent and is currently in the middle of applying for a new visa, after which she will be permitted to sign contract endorsements. There will be a queue out the door after her first pay cheque as a professional was for €200,000.

She had previously competed in the US Women’s Open, two years ago, as an amateur so she wouldn’t have been as fazed in hitting the range alongside Stacey Lewis, Inbee Park and Michelle Wie. Indeed she played a practice round with the latter in the build-up to this tournament.

Over the four rounds she shot a remarkably consistent 71, 72, 69, 69 to find herself in third place behind Wie and Lewis, and playing alongside celebrated American veteran Julie Inkster in the final round.

To get to PIneshurst she shot 152 to earn first-alternate status out of sectional qualifier held at Oak Valley in Beaumont, California, but was later added to field. She certainly maximised that opportunity.

The Jordanstown native moved to America as a 14-year-old, basing herself at the celebrated coach Hank Hainey’s – Tiger Woods is one of his former pupils – International Golf Academy.

Having completed her secondary school education she accepted an offer from the University of Alabama, where’s she’s obliterated so many records.

She won nine tournaments during his college career, six more than the next best player in the history of women’s golf at the university.

Three times an All American, she owns the two lowest-season single scoring average in the history of the ‘Crimson Tide,’ the name given the university’s sporting teams. She was also very academically gifted, qualifying with first class honours in terms of her accountancy degree.

She boasted a stellar amateur career and included in the highlights are a victory in the British Ladies Amateur Open Championship (2012) and also holing the winning putt in the 2012 Curtis Cup. Indeed she came straight from the 2014 version of that event to the US Open.

She admitted: “It’s obviously a lot different, but I think having played in two Majors before that’s helped me out a lot. I’m kind of used to the big environment and the crowds and everything that goes along with a US Open. Yeah, it’s different, but I’ve worked my whole life to this. I’m doing my thing.

“To start my professional career here is so amazing. I’m so blessed that it happened. It’s awesome.” Meadow attributed her ability to scramble around the greens to growing up playing links golf in Northern Ireland.

“There’s a little help there from my Portrush background, but it’s (Pinehurst No.2) just the type of golf course where you’ve got to be accurate, you’ve got to hit your numbers, and you’ve got to be really patient, because you’re going to hit great shots and they’re not going to end on the green.

“I don’t know if it really suits anyone, it’s just about execution.”