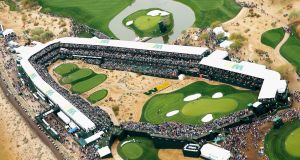 I’ll use one word to describe what conditions were like last Sunday at Torrey Pines: Horrendous! It brought me back to some of those days spent on windswept links, at Baltray and Rosses Point.

I’ve obviously played in such tough conditions before, and done well, but when you play them on links courses it is a little bit easier than what we had to endure.

The difference with somewhere like Torrey Pines is that you can’t run the ball like you do on a links and there’s also six inches of rough to factor in.

A few of the par fours were barely reachable. I’ll give an example. The par 4 seventh, even with the tee moved up, was 420 yards and I hit one of the best drives I hit all day and still had 200 yards to the front; and hit three-wood as good as I could hit it and the ball came up about eighth yards short. I normally hit my three-wood 250 yards through the air and this pitched 190. Get the picture?

To be honest, last Sunday in the Farmers Insurance Open was one of those days where you just had to get on with it.

Whenever I come over here to the PGA Tour, and you get those conditions of really strong winds and rain, you know half the guys are going out there and don’t even want to be there. So, that’s kind of the mentality I was using, to grind away, and it worked.

After I signed my final round card, I met Brandt Snedeker. We’d both completed our final rounds around the same time. I thought my 73 was unbelievable given the conditions . . . and for him to beat me by four? What can you say? You’ve just got to give him huge credit. I reckon it’s one of the best scores I’ve ever seen.

Brandt had to stay around until the tournament finished on Monday. Nobody has any complaints about going an extra day, especially when you’re lifting the trophy at the end of it. He deserved it.

I moved on Monday morning to Arizona for this week’s Waste Management Phoenix Open in Scottsdale and it was great to play a practice round on Tuesday with Paul Dunne and Pádraig Harrington. It’s a bit like the “Irish on Tour”.

I actually spent a lot of last week in San Diego with Paul. It’s the most I’ve got to know him since he came on tour and I was very impressed. It won’t be too long before he does something really good in the game. He’s obviously done a lot so far in his short career, but I was very impressed with how he goes about his business and gets on with things.

And I like what I’ve seen of the course in practice. The way I played last week was back to as good as I was in the middle of last year and, even in practice here, I’m feeling good. I just need to keep my head down and keep trucking along and continue doing what I’ve been doing. If I play with the attitude I had last Sunday for the rest of the year I think it will be a good one.

This is my second week of a three-week stint, moving on to play the Pebble Beach pro-am next week when I will have Dermot Desmond as my partner and I know we’ll be playing a few days with Paddy and JP McManus. That should be good.

The crowds here in Scottsdale are massive and I’m looking forward to playing the 16th – one of golf’s iconic par 3s – and hopefully I’ll give myself a chance into the weekend. The course is good, in unbelievable condition.

You need a good short game off tight lies which is where I come into my own. If I miss a few greens I know the lies will suit it, hitting off tight lies to firm greens. It is something I like to do.

There’s quite a contrast here to the conditions we had at Torrey Pines. We’ve gone from flags being ripped out of their holes and trees falling down to beautiful conditions on a desert course with beautiful greens and the forecast that the weather will warm up going into the weekend. Hopefully I will find that heat on my back going down the stretch.

Like every week on tour, I expect to go out and contend. It’s important to have some expectations but not to get too caught up in trying to win. I’ve prepared as well as I can since getting here and feel like my game is good, so, if I can hole a few putts, I feel like I can do anything.