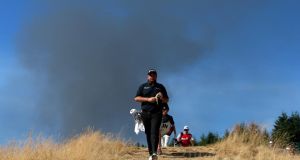 Ireland’s Shane Lowry walks the 15th hole as smoke from a nearby fire is seen in the distance during the third round of the US Open at Chambers Bay in University Place, Washington. Photo: Andrew Redington/Getty Images

He has sneaked in under the radar, and that’s just fine with Shane Lowry.

Dressed in black yet again on Saturday, as he has been throughout this 115th edition of the US Open in memory of the six Irish students who tragically lost their lives in Berkeley, the 28-year-old Offalyman shot a third round 70 for 209, one under par, which put him into a share of tied-fifth and within striking distance heading into Sunday’s final round.

The lead – on four-under 206 – was shared by a quartet of players, made up of US Masters champion Jordan Spieth, his fellow-American Dustin Johnson, Australian Jason Day – who carded a 68 despite again suffering dizzy spells – and South African Branden Grace, with Lowry also in a quartet of players three adrift. Only eight players reached the 54-hole point under par.

And, for Lowry, there was certainly no fear factor as he entered new territory in contending in a Major going into the final round. “I’m going to go out there and give it a 100 per cent and what happens will happen. What will be, will be. I think if I played the way I played (on Saturday) I should have a chance coming down the last few holes,” said Lowry, whose best finish in a Major was tied-ninth in last year’s British Open.

He added: “I don’t know how I’ll feel. I could be nervous, I could be fine and I could go out there and play the golf of my life. We’ll see what happens. The only thing I’m in control of is trying to stand on that first tee and hit a good shot, walk after that and see what happens from there.”

With the experience of that effort at Hoylake from last year, Lowry – ranked 55th in the world – now has a bigger target on his mind. In Saturday’s third round, he played wonderfully from tee-to-green, missing only one fairway. That indiscretion came on the 16th, where, taking driver in an attempt to reach the green, he took the wrong angle off the tee and hit a poor shot into heavy rough. It led to a bogey.

For the most part, Lowry played extremely well with back-to-back birdies on the ninth and 10th holes moving his name up the leaderboard and leading to roars of, “Go Irish!” from the galleries who acknowledged his efforts on a day when tricky pin placements and firm greens led to difficult conditions for scoring. One example of the toughness of the course came with Patrick Reed’s faltering effort, a 76 which included three double-bogeys and that saw him fall from a share of the lead down to tied-ninth.

Lowry – who intends to use his GAAGO streaming to watch some hurling and football matches over breakfast in a leisurely build-up to the final round – added: “I’ll have learned a lot from this week. Obviously I wanted to go well but, yeah, I’m fairly confident in what I’m doing and I’m just hoping I can keep it up for one more day and you never know what happens.”

For sure, the Irishman is playing with patience and control on a tough golf course but still managing to enjoy the experience. Walking up the 18th fairway in his third round, he turned to caddie Dermot Byrne and said: “‘I haven’t enjoyed a day on the golf course like that in quite a while’. It was great but I’m trying not to get too far ahead of myself. I’ve got a few people here, my dad and my brother and we’re just going to go back to the house and chill out. I suppose we’ll talk about GAA or something, Offaly having their first win in a while today was nice as well.

“So it’s just one of those things, I’ll have to bring myself back down to earth now, I’ve got a job to do.”

The man in black means business.

World number one Rory McIlroy experienced more frustration on the greens in a third round of 70 to remain four over par. “I missed seven good chances on the back nine, or seven makeable putts, anyway,” said McIlroy, who marked holing his par putt on the 18th with a mock celebration.

“I holed a few nice ones early on, but once I missed a couple it got into my head and couldn’t really get out of it.”

Henrik Stenson had memorably likened the greens to putting on broccoli, but McIlroy joked: “I don’t think they’re as green as broccoli. I think they’re more like cauliflower.

“They are what they are, everyone has to putt on them. It’s all mental. Some guys embrace it more than others, and that’s really the way it is. It is disappointing that they’re not in a bit better shape. But the newer greens like seven and 13, they’re perfect.

“I played last Sunday and I felt like they (the USGA) brought it a little too much towards the brink then. And it’s always a struggle from then to sort of rein it back little bit.”

McIlroy admitted he was frustrated to four-putt the 17th and drop another shot on the 18th in his second round, but was happy to have ground out a score after missing the cut in his previous two events.

“I’m pleased with how I’ve kept it going,” the 26-year-old said. “I’m hitting great shots and great drives and giving myself chances the whole time. “It’s just hard to stay patient whenever I’m not holing anything. I feel mentally I’ve accepted most things this week, which is good.”