Shane Lowry: Reaction to my Honda blowout was over the top 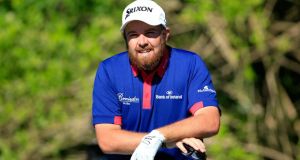 Shane Lowry: “Yes, I used some bad language, and I’m not going to condone that, but nobody got hurt.” Photograph: David Cannon/Getty Images

I can’t believe the amount of coverage – and social media comment – that my few choice words, uttered in the heat of the moment during the Honda Classic, received. Yes, I used some bad language, and I’m not going to condone that, but nobody got hurt. I’m a guy who wears his emotions on his sleeve; it’s a part of who I am and how I play the game.

It’s one of those things. My emotions got the better of me. It’s happened before and I’m sure it will happen again.

But I think it was all blown out of proportion. I’m not saying it is the right thing to do, to utter expletives as a ball is diving into a pond, but I know for a fact it is not the first– and won’t be the last – time it has happened to a player with television microphones picking it up.

I wasn’t expecting a ’phone call either from the PGA Tour requesting a sit-down meeting. But that is what happened too. Kieron O’Neill, from my management company Horizon Sports, got a call from Andy Pazder of the PGA Tour, requesting that I come for a talk. I didn’t really want to, but I had to, so I did.

We met on Tuesday here at Doral and I said to the PGA guys that I thought it was all blown out of proportion, that it wasn’t ideal what had happened but it was a slip of the tongue and it’s not like it is the end of the world.

I didn’t want to start naming names, but there have been certain guys at it for years. I did say to them I would try and not to let it happen again. I said I can’t promise anything because that is just the person I am. I didn’t harm anyone. I didn’t kill anyone. I didn’t hurt anyone . . .

In fact, I think guys who go out on the golf course and don’t shout fore are worse than someone using bad language!

I’m not going to condone cursing but it is a part of all sport. You see it watching football, players cursing all the time. I’m not saying it is right. I understand from the conversation with the PGA there will be a letter in the post and I’ll just let the lads in Horizon deal with that. I don’t want to know what it is. I’ve had my talk and it is over.

You don’t go out intending to curse or anything like that. I had been playing nicely for most of the day and just hit a bad tee-shot into the 15th and my emotions got the better of me. That’s what happened.

We play in highly-pressurised situations and personally I am always trying my hardest over every shot. I think if you can be guilty for trying too hard, then that’s what I got caught out doing.

Since I got to Doral for the WGC-Cadillac Championship, a few players have been slagging me – good-naturedly – and a lot saw the funnier side. Everyone knows that off the course I am a fairly light-hearted guy and tend to get on with everyone.

We drove down from the Honda to Doral on Monday and spent a few hours doing a planned photoshoot with Srixon in the afternoon.

I’d have preferred to have a day off, to rest after a tough week and ahead of another tough week, but in fairness Srixon are a great company to deal with and made things very easy.

Everyone in the field here will need to show a lot of patience because you’re going to make mistakes, that’s just the way this course plays.

Sure didn’t Rory throw his club into the water here last year?

That’s what it can do to you. Patience is the key . . . and I’ll try not to let my emotions get the better of me!