Shane Lowry: I won’t be happy unless I give myself chance to win Open 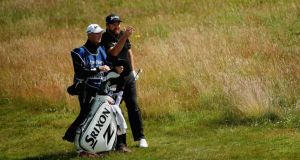 When Shane Lowry first played at St Andrews he was carrying his own bag and the wind was blowing at 40mph. He shot an 81. Photograph: Mike Ehrmann/Getty Images

I thought I was being very clever the other day in cutting through all the red tape and skipping ahead to the 10th hole to start my few holes of practice. I’d been having breakfast around 7am in the Old Course Hotel and spotted Tommy Fleetwood and Mark Calcavecchia heading off down the first; so, when I later pitched up at the driving range and realised there was a queue of fourballs waiting to head out, facing into six-hour rounds, I decided it would be better to head to the far end of the course and hook up with the lads. I didn’t need to play a full round.

It seemed a good plan, and we got a lift out to the 10th – a hole named after Bobby Jones – and I saw that my timing was perfect, Tommy and Mark were on the ninth green. The smile was taken off my face when a security man wouldn’t let me onto the course. I had my team with me: caddie Dermot Byrne, coach Neil Manchip and fitness specialist Robbie Cannon, and I had my player’s pass – but, no, the jobsworth wouldn’t let me in.

He’d apparently never seen a player’s pass and definitely didn’t recognise me. I wouldn’t say he would know a golf club if it hit him. He eventually let me in, but not Dermo. I suppose they’re told at the start of the week not to let anyone in under any circumstances. Eventually, Neil – who had his coach’s pass and was allowed in – took the bag from Dermo and it took a few phone calls before Dermot was let in.

Yer man was over the top but it was funny looking back on it; and the fact we could laugh about it shows how relaxed I am. The Open is a huge week, and there is something very special about playing at the home of golf. There’s no place like it. I love it.

I came up here on Sunday evening after the Scottish Open. I’m staying in the Old Course Hotel – you have to give yourself every chance in the week of an Open. I don’t believe in cutting corners. I am not saying you can buy your way to the top but you need to invest in yourself, to do things right.

I couldn’t wait to get out onto the course on Sunday. I walked around the back of the hotel, jumped the wall at the 17th, walked up the Road Hole and up the 18th. It was after 9pm but it was still bright and people were strolling around the course and the greenkeepers were out mowing. It was a lovely way to start the week.

My first time to play the Old Course was in 2006 in a college bursary tournament. The wind was blowing at 40mph, I was carrying my own bag, there were blind shots everywhere and I shot an 81. I didn’t think much of it. When I came back in 2009 for the Dunhill Links, I was a different player – a professional and Irish Open winner. It’s the type of course where, the more you play it, the more you enjoy it. I loved playing in the Open here in 2010, loved the roars and the Offaly shouts when I was coming down the 18th.

The conditions this week are very similar to those we get during the Dunhill Links. There’s no real rough and it is playing quite soft. I think it will be an advantage to those of us who have played here a lot.

It means that I haven’t had to play too many holes in practice – nine on Monday, and 10 each on Tuesday and yesterday – with the aim to be fresh for the championship itself.

It’s not as if there is something new to learn. I’ve only been playing practice rounds because I want to play a few holes for my golf, as opposed to trying to see the course.

Practice rounds can take up to six hours because of all the crossing and I haven’t done that because I want to stay fresh. When you’re here, it all just comes back to you – like on the third, you know you need to hit it left of the flag, things like that – as opposed to having to work it out with a book.

There’s only one shot that I have been practising the last few weeks with the Open in mind, and that’s the second shot into the 17th. Most of the course is there in front of you and it is about playing it through the air, as opposed to running shots in.

The approach to the 17th is different. Let’s say I hit my five-iron 205 yards through the air, but playing the 17th I’d be taking 30 yards off the shot, pitching it 170 yards and letting it run up.

I feel on top of the world heading into this championship. It’s not like playing the US Open at Pinehurst, where you’re sitting there on a Wednesday evening and you don’t know what’s going to happen. Here, it is different. You know if you play good golf around here, you’ll shoot a good score. It is less stressful than, say, Chambers Bay last month.

What would be a good week for me? Genuinely, I probably wouldn’t be happy unless I have left here with a chance to win. Golf’s a funny game. You could come second and you’d be leaving disappointed, or you could shoot 65 in the last round to finish second and you’d be leaving delighted. My first job is to make the cut, to kick on, to keep mistakes off the card and then to take my chances when I can.

In association with Simply Golf