Shane Lowry: ‘I want to put the last three weeks behind me’ 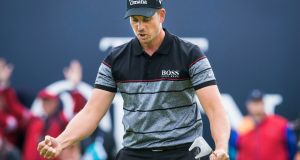 Henrik Stenson celebrates winning The Open Championship 2016 at Royal Troon. “It was the most unbelievable golf I’ve ever seen.” Photograph: Danny Lawson/PA

The crash landing of these past few weeks has been tough to take, especially missing the cut at the British Open.

I’d love to have been in Troon for the final round on Sunday but instead I was at Dublin Zoo, which was a decent alternative because it at least allowed me to unwind a bit.

And there was a great deal of excitement around the Phoenix Park because a baby western lowland gorilla had been born over the weekend.

I enjoyed my few hours at the zoo and timed it pretty well so that I got home to watch the final six holes head-to-head between Henrik Stenson and Phil Mickelson on television.

Hard to believe that only a month ago I was in the thick of the action in the US Open and now I was just another TV viewer. I know some players don’t like to watch golf but I do and, my God, it was the most unbelievable golf I’ve ever seen. We’ll be talking about it for years, won’t we?

And it was great to watch, great for the sport. The last while everyone’s been getting caught up about the Olympics and players pulling out and stuff but this was great for golf and you can throw Henrik in with Jason and Dustin and Rory and Jordan and Rickie and Bubba and honestly I think golf’s the best it’s ever been. There’s a depth of quality and it is genuinely so hard to win.

For the two players to finish 14 and 11 shots ahead of JB Holmes in third place was incredible. It’s hard to explain to people just how good that is.

I’ll be honest, I was delighted for Henrik. I know him well. He comes across as serious but he’s a bit of a messer behind it all, likes nothing more than a bit of craic, and I think he’s one of the most popular winners in a long time. I’m delighted for his caddie, Lordy, too; Gareth Lord’s a great friend of my caddie, Dermot Byrne.

Of course I’d love to have been part of the final day shootout and left the visit to the zoo until another time. Unfortunately I wasn’t part of it. Unfortunately my championship was over too soon.

It’s weird, the last three tournaments I’ve had bad first rounds. I’ve been thinking about it and maybe I’ve been trying to force it too much since Oakmont with the Ryder Cup around the corner and trying to make that team.

Maybe I’ve been putting too much pressure on myself and I need to change that attitude and approach. Maybe I should be a bit more selfish and play with the aim to win tournaments as opposed to trying to make a team.

I played poorly in the first round at Troon, there’s no denying that. I stood on the first tee on Thursday and fancied driver but we had a little chat and decided there was no point doing something too silly too early. But I was one-over after four holes and, around that course, you feel like you’re behind the black ball immediately because you know the back nine is so tough.

If I was going out for a game with the lads, I’d have stood up and hit driver down the first and then go find it, chip it onto the green. Maybe that’s the way I need to start playing again.

Unfortunately, missing the cut at Troon was the final act of a disappointing three weeks stint that had taken in my defence of the Bridgestone Invitational and then missed cuts at the Scottish Open and the British Open.

I’m looking to put the last three weeks behind me, and where better than at the US PGA in Baltusrol next week?

Up to the last few weeks, my stroke average on Thursdays was as good as any time in my career. I need to stop shooting in the mid-70s or high-70s in the first round which is what happened in Akron, Castle Stuart and Troon. I need to limit the bogeys. It’s given me something to think about but the plan is to try and kick on for the rest of the year.

Your career as a tour golfer is full of ups and downs, there’s never really a long period of time where you’re completely happy with what you’re doing. I’ve hit a bad patch for the past three weeks but it’s only been three weeks, it’s not as if it has been going on for months.

It’s one of those things where one good round and I will be back on my way.

European players have won two of the three Majors so far this year and I know better than anyone that it probably should have been three from three. Hopefully someone can make it three out of four next week and hopefully that’s me.