Shane Lowry: ‘I’m looking forward to a big finish to the season’ 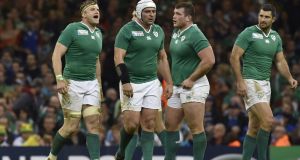 The post mortem is a ritual which always follows a defeat, no matter which sport you are playing. I know, I’ve been there enough times myself.

In golf, though, we’re lucky in a way that we usually have a tournament the next week so there isn’t too long to feel sorry for yourself or whatever.

But the raw disappointment of losing was fully brought home to me in the Millennium Stadium with Ireland’s loss to Argentina the other day. I really felt for the lads.

If you look at GAA teams, or in rugby or soccer, if you get beaten in a final or get knocked out like in the quarter-finals last Sunday, there is no quick fix. For a lot of them, it’s probably their last World Cup and the next tournament for them and Ireland is the Six Nations which is obviously not as big.

But that’s the next chance they have to bounce back as Irish players. It must be hard to take, after putting four years into one tournament to then to go out like that.

I’d been to the Ireland-Romania match earlier in the competition and again the atmosphere from the fans for the Argentina match was incredible. What I love about Irish people is the way we get behind our sportspeople. I was lucky to have a good seat in the second tier, between the halfway line and the 10 metre line, but like most around me I was stunned after the opening 10 minutes or so.

I’m no analyst or expert but if you take five of your best players out of the team, it has to have an effect. Not even the All Blacks would be the same if they lost five key players.

Sport, as I’ve discovered myself, isn’t easy. There are plenty of ups and plenty of downs and, unfortunately, most of the time the downs outweigh the ups.

So, and I really believe this, when you have the good days you have got to enjoy them. I count myself lucky as a golfer that most of the time you can get straight back on the horse so to speak, like when I won the Bridgestone after the disappointment of what happened when I missed the cut at the Open. You fall off, you get up and going again.

Fortunately for me now that is mostly in big tournaments. And I’m heading into a run of four big ones over the next month with the European Tour’s Final Series. I am playing the Turkish Airlines Open next week, then two in China, the WGC-HSBC Champions and the BMW Masters, and finally the DP World Tour Championship in Dubai.

I’ll be wearing some of the new gear I’ve designed with Kartel during the Final Series – which is particularly pleasing and some of the new range is now available in Heatons – and I’m really excited about the coming few weeks, playing courses which I like, and being in the thick of it all in the stretch of tournaments to Dubai.

It was a bit of a risky move taking those six weeks off after the PGA and I felt a bit rusty at the Dunhill but the whole week of the British Masters I felt so good, it was the best I’ve ever felt at a tournament. I would have won if I’d holed a few more putts but it was great to come back after that time off and do that, finishing runner-up.

Apart from taking time out to watch the rugby last Sunday, I’ve just been ticking over with my game. I’ll work with Neil Manchip and Robbie Cannon in the next few days and aim to be in the best frame of mind and in the best shape physically before flying out to Turkey on Monday.

I know what’s ahead, four tough weeks on the road. There’s no cut in any of the four final tournaments which means 20 competitive rounds plus the pro-ams and some practice rounds. Then there’s the travel. It’s fairly tough on the mind and the body. So, this coming stretch is the reason why I took that time off after the PGA and another two weeks after Woburn and why I think I will be fresh for the challenges ahead. I’ll be honest: I’m excited about the next few weeks!

I’ve a great schedule to finish off the season with these four big tournaments coming up and then the Nedbank in Sun City (which counts on next year’s European Tour schedule) and hopefully my first appearance in 2016 will be the EurAsia Cup in Malaysia. I should make that team.

Then, I’ve earmarked the Farmers Insurance Open at Torrey Pines in late January as my first outing of the season on the PGA Tour.

I sat down with my manager Conor Ridge last week to work out my scheduling. I’ve to play a minimum 15 in America and 13 in Europe - although the WGCs and Majors count on each, which helps – so I’ve decided to focus on the States for the first part of the year and won’t play this side until the Irish Open in May.

Finally, confirmation of the British Open’s return to Royal Portrush in 2019 is massive for Irish golf. Personally, I love Portrush, had a bit of success there in my time – winning the North of Ireland – and I’m sure G-Mac is very excited about the prospect of playing an Open in his home town. It’s something he probably thought would never happen. It’ll be an exciting build-up, that’s for sure.