Shane Lowry: ‘I’m happy with a decent start to the season’

‘I’ve had a top-10, a 13th and an okay finish in my first three tournaments on tour’ 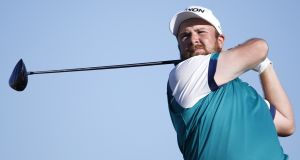 Shane Lowry: “The highlight of the three weeks? It has to have been the Phoenix Open. I mean, 200,000 at a golf tournament on a Saturday?” Photo by Christian Petersen/Getty Images)

You plan, practice and prepare but, even then, there’s only so much that is in your own control. Sometimes you have to accept what comes your way.

On Sunday evening we left Pebble Beach at 3.30pm for an 8.30pm flight out of San Francisco. It should have been a straightforward drive down Route 101 with lots of time to spare. But we missed our flight home. .

Anyway, it turned out there were four separate crashes on the highway on Sunday which accounted for one hold-up after another.

The road was like one long car park, and it all meant staying on an extra night in the US and finally getting home to Dublin later than planned on Tuesday.

It makes for a short week at home before I head back stateside on Sunday for next week’s Honda Classic and the following week’s WGC-Cadillac Championship in Doral. At least they’re both on the east coast.

My first stretch of tournaments on the PGA Tour for the season has left me pretty happy, and, looking back at the whole picture of the three tournaments, it was a good start to the year.

I think three weeks away is about as much as I can manage. I’m a bit of a home bird, which is difficult for a pro golfer and someone who is on the road so much, but that stretch away is the absolute limit for me.

I was starting to feel it a bit in Pebble Beach where I got off to a poor start each day but managed to rally and to make the cut which was satisfying.

It has to have been the Phoenix Open. I loved the whole buzz of the place and it is no wonder so many other tournaments are trying to capture a flavour of what they have managed to create there.

I mean, 200,000 at a golf tournament on a Saturday? There can’t be many other sporting events, of any kind, that can manage that.

From first thing in the morning, the crowds in Phoenix were massive. Everything about it was amazing. This was my first time to play there and I will definitely be ensuring it is one of the first events that I put on my itinerary when I sit down to schedule my season.

Standing on that 16th tee box was actually quite intimidating and yet at the same time appealing. It was great to be a part of it and I love playing in front of big crowds like that.

I like the West Coast swing, it’s a good way to get going to and to show that what I’ve been working on is transferring to the course. I hadn’t played too well late last season so it was good to contend in a tournament again. In the Farmers Insurance at Torrey Pines, I felt I was almost there and getting into position to contend. In Phoenix, I did contend for a while. It was nice to be back in that position.

The way tournaments are in America, they’re so big that, if you get off to a bad start, you feel like people are racing away and getting way ahead in the standings. So, one top-10, a 13th and an okay finish all come together for a decent start to the season and I’m actually very happy with the past few weeks.

And Vaughn Taylor’s win in Pebble Beach just shows you how important it is to keep believing in yourself and what you can do.

I don’t really know him at all. I remember him playing in the Ryder Cup at The K Club in 2006 but our paths haven’t really crossed much since I came out on tour. Funnily enough, I noticed him in the players’ lounge at Pebble Beach and wondered to myself how he was doing.

I hadn’t actually looked at the leaderboard before I went out on Sunday. Then, about three-quarters way around the course of the final round I notice he’s on top. It was a nice story and shows if you keep your head down and keep plugging away, you never know what’s around the corner.

I’m not doing too much this week, just keeping things ticking over and my body clock will only have settled before I’m off again.

I’m meeting Neil Manchip to hit a few balls for an hour or so today but to have a chat with him as much as anything and I’ll also get in a couple of gym sessions. Other than that, it’s about relaxing and enjoying some home time before flying out to the States again on Sunday. I’ll got to Florida on Sunday evening, hit the practice ground on Monday and I’ll be ready to go come Thursday. Take a tip from me . . . .

The PITCH SHOT is a very important one for everyone. The trick is to get the ball landing softly.

I always tend to grip the club as lightly as possible. I think there is a tendency for a lot of people to grip the club TOO FIRMLY when pitching the ball and, in doing that, they lose their feel. That’s when playing a shot with SOFT HANDS comes in . . . . and you can only do that by gripping the club lightly.