Rose focused on victory in final leg of Race to Dubai 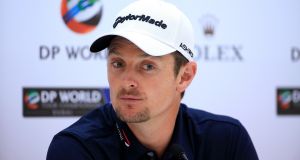 Justin Rose fancies his chances of victory in 2015 DP World Tour Championship in Dubai, UAE. The tournament is the final event in golf’s “Race to Dubai”. Photograph: David Cannon/Getty Images

Of those, Rose may be most worthy of respect; the Englishman finished as runner-up here in both 2012 and 2014, and is approaching the end of what has been a highly successful and under-acclaimed year.

For Rose to prevail, there are three scenarios. If he wins the final event, McIlroy and Willett must both finish worse than in a two-way tie for second. If Rose is runner-up, McIlroy must be worse than seventh, Willett likewise, and neither Grace, Oosthuizen or Lowry can win. If Rose finds himself in a two-way runners-up spot, McIlroy needs to be worse than 46th, Willett worse than 45th and none of the aforementioned trio, again, can lift the Tour Championship trophy.

“Where those guys are going to have to keep their eye up on one another; there’s a scenario where they could finish 20th and 25th and pick up the Race to Dubai, obviously, if people like myself and Shane don’t finish in the top two.

“I need to go out and pretty much win the tournament and if I do that, it could be a great week. So from that point of view, is there less pressure on me? Probably not. There’s probably more pressure because I have to win, but it’s a much more simple equation. ”

Rose cites consistency as the most pleasing aspect of his year. He has won twice, in Hong Kong and New Orleans, and brushed with glory at two majors. “Jack Nicklaus has always said that his bad was better than everybody else’s bad, and he was able to manage his game and that created a lot of winning opportunities for him,” the 35-year-old explained.

“You can never control what other people do. So if I played like I did this year next year, maybe that would result in one or two major championships. I feel like I’m knocking on the door again to win the big tournaments and sometimes you need to do that to get that breakthrough.

“I felt like I did all the right things to give myself a chance to win this year, so I just need to continue to do that next year. You sometimes can’t force the victory. It just needs to happen.” Guardian Service