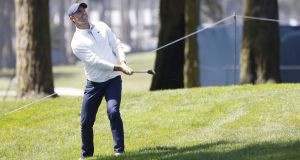 Rory McIlroy plays from the rough on the third hole during his second round at the US PGA Championship. Photograph: John G Mabanglo/EPA

The moral high ground is unlikely to precede a competitive low score. If Rory McIlroy’s bid for a third US PGA Championship falls short by one – and for now at least, that remains a big if – his reflections on an ­endearing moment of sportsmanship would be valid.

He acted against his own hopes of glory at Harding Park during Friday’s second round by affording himself a clear conscience. His nod to the ­principles of the game was timely.

Bryson DeChambeau’s forceful discussions with rules officials have overshadowed all that is good about the Californian’s post-lockdown PGA Tour run. If there is an envelope, DeChambeau will push it. Players who operate within the spirit of the rules should always be more worthy of praise than those who view them as a way of gaining marginal advantage.

The absence of spectators at the first major of 2020 has ­umpteen side-effects, even for someone as prominent as McIlroy. Finding wayward balls is more tricky without several thousand spotters. So it proved at the short 3rd as McIlroy required a search party to locate a loose tee shot. The ball was located only after a member of the media stood on it.

McIlroy was allowed a drop, ­creating the original lie as before a size 10 shoe was planted on his ball. When McIlroy took the relief, the ­position was favourable. Uncomfortable with this, the recently deposed world No 1 pushed the ball further down in the grass. That a costly bogey ensued did not alter McIlroy’s belief he had done the right thing.

“I just wouldn’t have felt ­comfortable,” said McIlroy of his original drop. “I placed it, and the rule is try to replicate the lie. No one really knew what the lie was, but if everyone is going around looking for it, it ­obviously wasn’t too good. So I placed it, I was like: ‘That just doesn’t look right to me.’ So I just placed it down a little bit.

“Golf is a game of integrity and I never try to get away with anything out there. I’d rather be on the wrong end of the rules rather than on the right end because as golfers, that’s just what we believe.”

Colin Montgomerie has never fully lived down a controversial drop in Indonesian Open of 2005. Instead, McIlroy’s move conjured memories of his countryman and childhood influence, Darren Clarke, at the 2006 Irish Open. Play at Carton House had been abandoned because of bad weather, with Clarke two shots ahead. He returned for a delayed Monday finish to discover his ball, originally in thick rough, had been adjusted to be in a position whereby the green could be hit in two.

“It was much better than when I left it,” Clarke said later. He chipped out sideways, the only shot he could initially have hit, and was widely lauded. “Honesty is part and parcel of the game and I could not have acted any other way,” he said. Thomas Bjørn pipped Clarke to win the tournament.

Galleries used to be so ­fundamental. Paul Casey became the latest player to admit he has struggled with the absence of fans. “I’ve really missed it, plain and simple,” said the Englishman, who has played himself into US PGA prominence.

“I’ve felt I’ve not been able to sort of just get the excitement going, lacking energy and all that goes with having fans at a sporting event. I just ­genuinely miss it.”

While that has also been McIlroy’s default position, he could witness the side benefits when spending days one and two with Tiger Woods. The event’s marquee grouping, which would ­normally be swamped by crowds, played in relative tranquillity. “It’s so much easier,” said McIlroy of accompanying Woods.

“I’m happy to be drawn with him every week until fans come back. On the 12th hole, the tee box there ­alongside the road, Tiger gets on the tee and everyone [looking through the fence] goes crazy and you have to wait for them to settle down.

1 Gordon D’Arcy: the next fear for Irish rugby is England in Twickenham
2 Seán Moran: Fallout from Tyrone final celebrations will concern GAA
3 How Dundalk’s opponents Sheriff started on the wrong side of the law
4 What next for green jersey hero Sam Bennett after toughest of Tours?
5 Born to ride, born to win: Sam Bennett, the making of a green machine
Real news has value SUBSCRIBE

Gordon D’Arcy on what went wrong for Leinster; Donegal final postponed 07:06
Seán Moran: Fallout from Tyrone final celebrations will concern GAA 06:45
Eric McNamara hoping Internal Transfer can get the deal done in Kerry National 06:00
Sporting Upsets: The summer that London tore up the script of two and out 06:00
How Dundalk’s opponents Sheriff started on the wrong side of the law 06:00
Here is your handy guide to sport on television this week