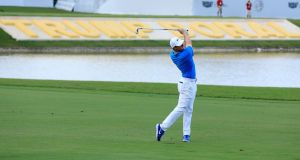 Rory McIlroy hits his second shot to the 18th hole during the second round of the World Golf Championships-Cadillac Championship at Trump National Doral Blue Monster in Florida. Photograph: David Cannon/Getty Images

The putting performance that fully endorsed a change of style from Rory McIlroy was followed by an admission of his biggest fear upon making that switch. With McIlroy now adopting the left-hand-under-right approach as utilised by the world number one Jordan Spieth, the Northern Irishman worried about a wider portrayal of replication.

“It’s funny, I’ve been playing it around in my head a little bit about making the switch,” McIlroy explained. “The one thing that I was sort of worried about was ‘McIlroy copying Spieth’. That was my big thing.”

It was to the 26-year-old’s credit that he offered this concession. Day two of the WGC-Cadillac Championship had served as a reminder of McIlroy’s turbo power, a touch not visible elsewhere in professional golf. He signed for a second round of 65 – including just 23 putts – to move to within two of the halfway leader, Adam Scott.

This matched McIlroy’s finest 18-hole score at Doral. The key aspect resonates in the fact that, tee to green, his play was not considerably different than when signing for a 71 on Thursday.

“Over the last few rounds, it’s just been great shots mixed with poor shots and short-siding myself, mental errors. I could make six birdies but if you’re making six bogeys or worse, you’re not really going to make any ground. It was nice to play a pretty much flawless round. I think the difference was holing par putts when I needed to.”

Spieth had joked with McIlroy about “switching to the dark side” with regards putting. The Masters and US Open champion had little else to smile about, a frustrating 72 leaving him seven adrift of Scott and in a share of 12th. The Australian is seeking back-to-back wins after securing the Honda Classic on Sunday; a Friday 66 leaves Scott with the serious prospect of doing so.

“I’ve gotten off to good starts and good finishes; when you’re playing pretty good anyway that helps your scoring a lot,” Scott said. “I hope I can rely on that the next two days but you know, I’d like to find a little extra gear this weekend. I think I’ll probably need it to win with the quality of leaderboard we’ve got and that will be the test for me.

“Hopefully I’m in a similar position this Sunday and I can draw off some experience of just seven days ago.

“But this is another week. I can’t sit here and dwell about winning and I think yesterday, maybe I did that. As I teed off, I was still just floating around and a couple of bogeys came quickly. Around a course like this, you have to be quite focused, otherwise mistakes will happen. That will be my goal; on the weekend to really stay focused and keep my foot down.”

Scott is correct to acknowledge standards. Dustin Johnson, the defending champion, sits on the same aggregate as McIlroy after a second round of 64.

Earlier, Phil Mickelson had raced to nine under par and a three-shot lead, courtesy of four front-nine birdies in succession. An unforeseen topple followed, with the 45-year-old playing the inward half in 40 for a level-par 72. Not that Mickelson’s attitude was at all bruised.

“I kind of lost focus the back nine,” Mickelson admitted. “I just had a hard time focusing but I’m looking forward to the weekend. I’m playing really, really well.

“I just know that it’s the best I’ve driven the ball, the easiest I’ve driven the ball. Misses are minuscule. Speed is back. Iron game is sharp and I’m hitting fades, draws, high, low, everything at will without much thought. It’s becoming much more instinctive. I don’t have to think about the technique or the mechanics of anything. I just kind of look and react.

Shane Lowry will have been disappointed to finish with a closing bogey to sign for a 73 and a level par total. Starting on the 10th, he turned in one over but a birdie on the eighth, his 17th, was undone on the par-three ninth.

Two birdies in the last three holes helped to putt a gloss on a round that for long stretches was a bit of a struggle for Graeme McDowell as he added a 71 to his opening 74 to be one over at the halfway stage in the non-cut event.