Ireland’s Shane Lowry seven off the pace after a 67, Pádraig Harrington misses the cut 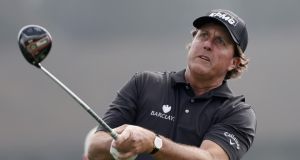 Local favourite Phil Mickelson has joined Tiger Woods as a weekend casualty as the five-time major winner failed to make the cut at the Farmers Insurance Open at Torrey Pines on Friday.

Mickelson backed up his 74 on the South course from round one with an even-par 72 on the easier North Course on Friday to be left at two-over and headed for the exit door Woods went through on Thursday with a back injury.

The San Diego native was 12 shots off the pace of fellow American Harris English, who put together a six-under 66 on the North course to push out to 10-under 134 and a two-shot lead late in the second round.

“I take a lot of positives from today. I hit the ball well, made some really good putts and hit some good wedge shots,” English said.

He is bogey free through two rounds, the first time a player has accomplished the feat at the tournament in four years.

“I was very excited about that yesterday,” Harris said. “Especially coming out this morning and having to finish some holes (from the first round) kind of in the cold and it’s good to make some of those six-footers coming out for par.”

American Nick Watney put together a 65 on the North and Venezuelan Jhonattan Vegas a solid 69 to move to eight-under and a share of second with Briton Martin Laird (68).

Ireland’s Shane Lowry is seven off the pace after a 67 left the Offaly man on three under, but three-time Major winner Pádraig Harrington after a 79 left him four over par.

For Mickelson it was a day to forget with two bogeys in his first five holes.

He pegged them back with back-to-back birdies on the 16th and 17th, his seventh and eighth holes, and gave fans hope with a birdie on the second, his 11th.

“It’s very frustrating for me right now,” Mickelson said. “I felt really ready to start the year and these first few weeks have been very poor. I feel like I’m hitting the ball tee to green quite well, really well, but my putting is beyond pathetic and if I can’t get back to the levels of 2013, I’m not sure what I’m going to do, because this is very frustrating.”

Johnson, who spent six-months on a voluntary leave of absence for personal rehabilitation, missed the cut by a shot.

“I was just a little bit off but I still played pretty well,” Johnson said. “I had a lots of putts that could have gone in, but didn’t. But I hung in there and fought pretty hard. Just a little rusty that’s all.”