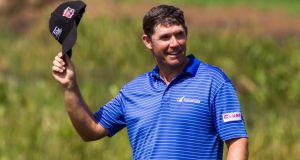 Palm Beach Gardens, Florida, USA: Padraig Harrington waves to the gallery as he walks up to the 17th green during the second play-off hole during the final round of the Honda Classic. Photograph: Peter Casey/USA Today

It ended with a missed three-foot putt, which was appropriate since he’d been missing from that distance all weekend. But for once it didn’t matter. Padraig Harrington had earned himself enough breathing space on the second play-off hole of the Honda Classic at Palm Beach Gardens in Florida to beat his young American opponent Daniel Berger.

The famine is over. At the age of 43, Ireland’s most popular sportsman has won a big American tournament for the first time in nearly seven years.

Berger, his 21-year-old opponent, could only find the water in response and by the time he holed out for a five, Harrington had three putts to win. He should have needed only one but two did the trick.

“All day, I was pretty good,” he said. “I never once allowed myself to think what all this would mean if I won. I was playing on sponsors’ invites [in the US] and a win means I won’t have to do that anymore. This changes everything for the guts of three years – it gets me into the Masters. But I didn’t think of that.

“I did know experience was on my side in the play-off. I felt that on the first play-off hole I played like I was happy to be there. But on the second one, I knew I had to take the initiative. I definitely felt like I got a second chance. Being first up on the tee, I knew I had to hit the shot.”

He hit it and Berger folded, handing Harrington his first tournament win on American soil since the 2008 US PGA championship. He had fallen from being ranked number three in the world following that win to 371st three months ago. This win lifts him back up to 82nd.

He achieved it despite a final round that straddled Sunday and Monday due to weather delays and that contained two double bogeys thanks to some very nervy short putting, reminiscent of his 2012 season when he suffered the dreaded yips. But four birdies in a row on the back nine got him back in contention and his wonderful five-iron in the play-off carried the day.

“I was just trying so hard to tell myself that the yips weren’t back last night. I practised so hard on the putting green last night until about seven o’clock. Then I came out today and one of the things that turned it around for me was a phone call with my wife this morning.

“Just as we were finishing up she said, ‘Remember, if you had a 10-foot putt to win the tournament, you wouldn’t want anybody else standing over it only yourself.’ And she was right. I kept that with me and I wasn’t getting in my way. I was picking the best putt and rolling it at the hole.”