Training every day and doing over 120 miles a week 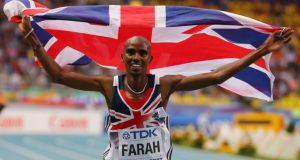 Mo Farah has conceded that he is “more tired than ever” after stepping up his preparations for next year’s London marathon – but insists everything is heading in the right direction as he gets into shape to run 26.2 miles in competition for the first time.

Farah, who won a brilliant double-double of 5,000m and 10,000m gold at this year’s world championships in Moscow, has upped his training to more than 120 miles a week and is working on changing his stride pattern to make it more efficient for long distances. But Farah warns that his step in the unknown in April could be as tough as his Olympic and world championship triumphs.

“The hard training’s already started,” he said. “I’m feeling more tired than ever from training every day, and doing over 120 miles a week. Normally I don’t do these distances until later in the winter. It’s not easy but it’s all going in the right direction.”

Farah admits to entertaining doubts about how his first crack at the marathon will go, but says he does not feel under any more pressure to protect his status as one of Britain’s greatest distance runners. “Every athlete is different. I could be good at marathon, I could not be,” he said.

“But I love the sport, I train hard, I love what I do. It’s a great honour to be thought of in the same way as such great athletes as Seb Coe, Steve Ovett and Steve Cram and the rest. I don’t see that as any pressure.”

Farah’s opponents for April have yet to be announced but they could include Kenya’s Wilson Kipsang, who broke the world record in 2hr 03min 23sec in Berlin in September, or Ethiopia’s multiple Olympic and world champion Kenenisa Bekele, who is planning to move to the marathon in 2014.

“Dave Bedford [the race organiser] usually has the best so it could definitely be as hard as the Olympics and the worlds,” Farah said. “I’ve never done a marathon before and, while it would be nice to do well, you have to respect it. It will probably take me three or four races to get it right.”

Dismissed chances
He dismissed his chances in Sunday’s BBC Sports Personality of the Year, and said he will be voting for Andy Murray. “Andy’s definitely the favourite,” he said.

Farah allowed himself a short break after finishing second to Bekele in the Great North Run in September, during which he learnt how to water-ski on Richard Branson’s Necker Island.

While he was away, Farah also watched Kipsang break the world record, but rather than be intimidated he says he was inspired. “It definitely really excited me,” he said.

“I know Wilson and have seen him at Iten in the Rift Valley and he’s a good lad. He speaks good English and you can have decent conversations with him and it’s nice to see someone you know break that record.”

Could Farah one day take it off him? For the moment, at least, he is non-committal. “Once I get an idea after this one, and the feel for it, we’ll see,” he said.
Guardian Service