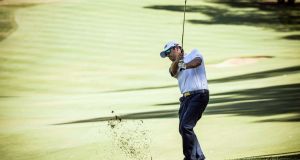 Louis Oosthuizen will defend a three-shot lead going into the final day of the ISPS HANDA Perth International, but it could have been even better for the South African.

Ireland’s Cormac Sharvin, making his professional debut, improved on his second round with a 72 to sit on one under par.

Oosthuizen, following up his 64 on day two, was flying on seven under after 15 holes and for a short while boasted a five-shot lead over the chasing pack.

However, back-to-back bogeys on the 16th and 17th — the first shots Oosthuizen had dropped since the second hole on day one — left the former Open champion having to sign for a five-under-par 67.

That still left him on 15 under for the tournament though, and boasting a three-shot lead over nearest challengers Romain Wattel and Peter Uihlein, who had contrasting third rounds.

Frenchman Wattel went out in just 31 during a blemish-free round of 65 while American Uihlein — the joint leader heading into the weekend — finished with a 71 after carding six birdies, two bogeys and a treble-bogey six on the 12th.

Oosthuizen said of his round: “All in all, there was just two mistakes I made and I played lovely the rest of the round.

“I lost a bit of concentration on 16. I was a bit worrying too much on where the pin position was.

“That probably went over to 17, not doing what I do on the tee shot, working out where the best spot is and just miscued it a little bit and left myself with an awkward little pitch shot.

“So those things happen. As long as it’s not happening when you’re tied with the lead three holes to go, but luckily there’s still a lot of holes left.”

He added of his lead: “It’s a good spot to be in, so looking forward to tomorrow. Going to need to play quite well, because obviously there’s a lot of birdies out there, and everyone will be firing.”

Jason Scrivener is fourth on 11 under and his fellow Australian Brett Rumford is a shot further back in fifth. Rumford sat alongside Uihlein on 11 under overnight but he dropped back to 10 under after an eventful 73 on Saturday.

Scot David Drysdale leads the British challenge on eight under after a 69, with England’s Andrew Johnston on seven under.