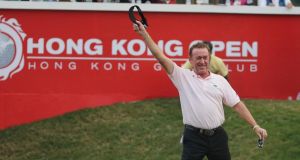 Defending champion Jimenez birdied the first hole of a sudden death play-off with Prom Meesawat and Stuart Manley, the trio having finished tied on 12 under par after a dramatic final round.

The 49-year-old has now won 20 European Tour titles, 13 of them since he turned 40, and extended his own record as the oldest winner in Tour history.

“I love this place, I love this golf course,” Jimenez said after a closing 66. “I played very well this week and tied the record with four victories.

The last of Jimenez’s four Ryder Cup appearances came at Celtic Manor in 2010. He turns 50 on January 5th and would comfortably beat the record of Ted Ray — who was 50 years, two months and five days old at the inaugural contest in 1927 — if he can qualify for Gleneagles next September.

“If I play the way I am playing this week I will be in the Ryder Cup team,” he added. “There is one more year to go and now I get this victory here it will help a lot. You never know; I would love to be part of the team again.”

Meesawat looked set for victory when his second eagle of the day on the 13th briefly gave him a three-shot lead, but he bogeyed the next and saw Jimenez draw level with birdies on the 13th and 14th.

Jimenez dropped a shot when he three-putted the 15th, but birdied the 17th and saved par from a greenside bunker on the last to join Meesawat, who had completed a 65, in the clubhouse lead.

Manley’s chance looked to have disappeared when he missed a good birdie opportunity on the 17th, but the Welshman chipped in from just off the 18th green to make it a three-way play-off.

The players returned to the 18th and Jimenez gained a massive advantage by being the only player to hit driver off the tee, Meesawat coming up just short of the green with his approach. while Manley’s second shot from almost 200 yards was pushed off target and clattered into a hospitality tent.

From there he could only chip onto the green and leave himself a long par putt from just inside Jimenez, but after Meesawat chipped up to three feet, the veteran Spaniard secured the win by holing from 25ft for a winning birdie.

“I hit driver (on the 18th) because I saw the pin position,” Jimenez said. “It’s a very tough corner and you need to hit a short club into there or play into the middle green because there is not much space there.

“On the play-off hole I did the same thing; if you want to make birdie and attack the hole you need to hit a short club so you have to take the risk and hit driver and I did it.”

Speaking before the play-off, Meesawat said: “It was a beautiful day for me, I had two eagles on par fives, everything was perfect.

“I was a bit unlucky on 14, my ball was lying on a stick and I didn’t hit a good second shot and made a bogey, but that was the only mistake today. I am very pleased with my round.”

Ireland’s David Higgins, who had led after the first round, finished in a tie for 30th place after a final round of 68.