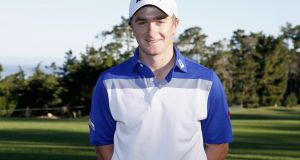 Paul Dunne shot a second round of 76 at Pebble Beach. Photograph: Getty

As South Korean Sung Kang shot the lights out to grab the clubhouse lead in the AT&T Pebble Beach pro-am, Phil Mickelson provided proof of the old adage that class is permanent.

Kang briefly flirted with posting a magical 59 - before having to settle for a 60 that gave him a midway total of 11-under-par 231 - as Mickelson, a four-time winner of the tournament, reminded everyone of his pedigree with a second round 65 for 10-under-par.

Of the three Irish players in the field, three-time Major champion Pádraig Harrington - benefitting from a couple of chip-ins - led the way as he moved into contention with 71 for four-under 139. But Shane Lowry, coming into the tournament on the back of a tied-13th in Torrey Pines and a tied-sixth finish in Phoenix, and Paul Dunne struggled until late rallies and both face a battle to survive the three round cut.

Harrington, in the second week of a four-tournament stretch leading up to his defence of the Honda Classic at the end of the month, used a missed cut at Phoenix to work on elements of his game. It worked. The rust evident in the desert has been replaced by a greater sharpness, and he took advantage of the Par 5 second at Pebble Beach by chipping to three foot for an early birdie.

Playing his second round at Pebble Beach, the Dubliner claimed another birdie on the Par 5 sixth, finding the green with a 3-wood approach from 237 yards and two-putting before adding a third birdie on the 10th where he hit a 170 yards approach from the left rough to 20 feet and rolled in the putt. A wayward drive into rough on the 16th proved costly though as Harrington bogeyed the 16th to drop back to two-under for his round (and five-under for the tournament).

Unfortunately for Paul Dunne, it proved to be a tough day at the office. The 23-year-old Gresytones golfer - playing on a sponsor’s exemption - struggled at the famed links and was heavily penalised for finding a number of bunkers. That tendency to find sand was apparent from the first hole when he found a greenside bunker and suffered an opening bogey.

On the second, Dunne’s drive found a fairway bunker and compounded matters by also finding a greenside bunker on the Par 5 en route to another bogey. Further bogeys followed on the fifth and eighth, the only bright light coming with a tap-in birdie on the sixth. Dunne’s homeward run also featured further visits to sand traps, with bogeys on the 12th and 14th. A 10-footer for birdie on the Par 3 17th got him back to one-over overall before an eight-footer on the 18th left him on level-par 143 alongside Lowry.

Lowry - playing alongside Harrington - got off to a good start with an opening birdie but gave the shot back immediately with a bogey on the second, where he drove into a fairway bunker and then compounded matters by finding another trap with his next shot. Although Lowry managed a birdie on the sixth, he then suffered back-to-back bogeys on the eighth and ninth to turn in one-over 37.

Mickelson set the course alight at Monterrey Peninsula with a front nine of 29 that featured five birdies and no bogeys. But such fireworks failed to continue on the run home as he added two birdies and suffered two bogeys, including a dropped shot on the 18th, to finish with a 65 which tied his best low round at the course in 2012. On that occasion, he went on to win the tournament.