Feeling like a contender and raring to go in Valhalla 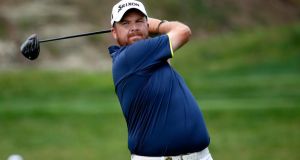 Shane Lowry practicing at Valhalla Golf Club ahead of the start of the US PGA. The course has been playing easier than expeecte in practice. Photograph: Sam Greenwood/Getty Images

How do I put this? I’m hot and I’m sticky and I’m tired. That’s how you feel after walking in off the course after playing 18 holes in these conditions at Valhalla Golf Club. It’s the same for everybody but it’s a far cry from Clara, I can tell you.

It’s so important to eat and drink properly this week and to make sure that your mind and body is ready and able for what is a huge championship.

I’m raring to go, I must admit. I’m going to throw everything at this one. I’ve prepared well, feel good, and there is an even greater belief that I can contend after finishing in the top-10 at the British Open at Hoylake. I just need to keep the putter going, to keep things ticking over.

To be honest, I was surprised when I first played the course the other day. It’s a strange Majors golf course, not as tough as I was expecting.

You don’t need to bomb it. If you hit it straight, there’ll be a lot of chances. I think there will be low scoring, which is not really what you see too often in the Majors.

The big thing for me this week is if I can cope with the speed of the greens which could run as fast as 14 on the stimpmetre. It’s important to get confidence on them early on. They were quick at Pinehurst for the US Open too and I coped okay with them there.

It’s easy to get caught up in finishing ninth at the British Open. There were a lot of people patting me on the back and telling me how well I had done. If I’m honest, that’s all well and good, but I want more than that.

Myself and Dermot, my caddie, were just talking about that the other day, about how comfortable I was, and I feel I can kick on from that. In the past few years I’ve had this top-50 in the world rankings looming over me but I now realise I should be targeting more than that.

Why not top-30? Or top-20? I’m really trying to be one of the top players in the world. That’s the kind of route I am going down now.

This is my first tournament since Hoylake and it is great to be back in another Major. I’ve no regrets about not trying to get into the tournament in Reno last week on the PGA Tour. My time spent at home was far better for me. I practiced well, played the K Club with my coach Neil Manchip, and got to see my brother, Alan, playing in the South of Ireland at Lahinch.

I suppose the relationship me and Alan have is that I try not to get too involved in his golf. I felt a little sorry down in Lahinch because he was the one playing the tournament and people were trying to pull and drag out of me.

I was trying to stay out of his way and let him do his own thing. But watching his demeanour on the course, it was very similar to what mine is. He is a little fiery, a little hot-heated too but I like the way he is able to get annoyed and then come back.

He’ll always have a few good words. In fact, I love having family or friends with me at tournaments. Darragh Fanning, who plays for Leinster, was with me at the US Open and Andrew Cushen, who plays football with Clara, is with me this week . He is also very positive about wanting me to do well.

Most of all, I really want to do well. Hoylake really whetted my appetite to compete and perform in the Majors and I want to try and kick on. I love contending. There is nothing worse than playing on a Sunday when you’re back in 60th position.

It’s been quite hard at times this season, either missing the cut or being up the leaderboard, but my game has been more consistent since May and I want to keep pushing myself.

People keep asking me about my chances of getting onto the team for the Ryder Cup and I probably need to win or finish second this week for that to happen.

I got a kick out of people watching Paul McGinley talking to me on the range on Tuesday morning and they were probably jumping to conclusions. In fact, all we were talking about was GAA and how the championship is going. Nothing to do with golf at all . . .

I’m hitting the ball well. My putting is good and so is my iron play. I’m enjoying my golf after a tough start to the year but I battled through that well. I always felt when I came out the far side of that spell that I was going to be a stronger and better golfer for it and I feel like I am.

This is my third Major of the year and I believe I can definitely compete. If I play my best golf, get a few of the right kind of breaks, and keep on making birdies, you never know what is going to happen.

There haven’t been many tournaments over the past few months where I didn’t think I could win and this week is no different.