Different Strokes: McDowell got the ball rolling at US Open 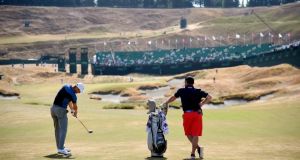 Martin Kaymer hits an approach shot during a practice round prior to the start of the 115th US Open Championship at Chambers Bay. Photo: Harry How/Getty Images

What did Graeme McDowell do? Only open the floodgates, if you must know; after a drought of European winners that dated all the way back to Tony Jacklin in 1970. If those previous forty years had proven to be barren terrain for European invaders, G-Mac’s win at Pebble Beach has acted as the catalyst for change.

So it is that European golfers have won four of the past five US Opens, with McDowell’s success in 2010 - some 910 miles down the Pacific coast - followed in turn by Rory McIlroy (Congressional 2011), Justin Rose (Merion in 2013) and Martin Kaymer (Pinehurst 2014). It has been quite the run, with only Webb Simpson (Olympic in 2012) managing to stem the tide.

The upturn in European fortunes can’t simply be put down to the quality or depth of players in this current generation. After all, the period from 1970 up to McDowell’s breakthrough Major win was one that included such European stalwarts as Seve Ballesteros, Bernhard Langer, Jose Maria Olazabal and Colin Montgomerie - the Scot, who never won a Major, will always look back on missed opportunities at Congressional in 1997 and Winged Foot in 2005!

McIlroy, when pondering the question of why the Europeans should turn a Major which repeatedly thwarted them through the years into one which nowadays seems to offer the best chance of success, has unsure of the true reasoning. “It’s hard to say, (you look) at Merion in ‘13 and Pinehurst in ‘14 and those two courses couldn’t have been any different in terms of the way they were set up (and still produced European champions),” he said, adding: “The way the USGA have started to go with Pinehurst (last year) and Chambers Bay is going for not as much rough, (giving players) along the ground option a bit more, it brings Europeans into it more and maybe favours the style of golf quite frankly we don’t play week-in and week-out. We play the ball in the air most of the year and have to adapt to fit that style.”

Still, the fact of the matter is that Europeans, who approached the US Open as if it were a rubik’s cube that was nigh impossible to decipher, have - in the past five years - found a way to work out the puzzle that is traditionally the hardest examination in golf.

And as much as the change in set-up has contributed to increasing the chances of a European winner these days, another factor is undoubtedly t the number of competitors from Europe who now get the chance to tee up. When Jacklin became the first European winner in 1970 since Willie Macfarlane in 1925, there were less than a handful of Europeans in the field at Hazeltine; at Chambers Bay this week, there will be 29.

The increase in numbers - thanks mainly to the work done by past European chief Ken Schofield - has also significantly increased the odds. After all, golf is a numbers game.

There is an Irish link to this week’s US Open at Chambers Bay, which will probably make the quartet of players - Rory McIlroy, Darren Clarke, Graeme McDowell and Shane Lowry - feel a little more at home: the fescue grasses used in the course’s construction were planted on the recommendation of Irish-based company, Turfgrass.

John Clarkin, the founder of Turgrass, was brought in by Robert Trent Jones having previously collaborated with the American course designer on a projects in Europe.

“When I visited Chambers Bay and studied the climate and gathered other agronomic data, (I proposed) a predominantly fescue-based seed as most appropriate. Fine fescues reduce both water use and the requirement for fertiliser, which are key issues in golf operation and management. Our goal was a course which could be maintained in a traditional manner, with minimal inputs, capable of flourishing in wet conditions but tolerating drought as well,” explained Clarkin, who has the distinction of being the first Irish graduate of Penn State University’s turfgrass management programme.

Clarkin, incidentally, installed the green complexes at Padraig Harrington’s home in the foothills of the Dublin mountains and also installed and managed the greens at Rory McIlroy’s former home in Down.

Although there is an “Irish feel” to the green complexes, Clarkin explained the notable difference was that the climate in the Pacific North West is about ten Fahrenheit warmer. “We also found there were occasional strong winds, which could cause erosion and blow out bunker sand. Our grassing recommendations took all these local conditions into account, while retaining the aim of crerating a true links with its firm conditions, eccentric rollouts and awkward lies.”

10,127 There were a record number of entries for this year’s US Open here at Chambers Bay, with 10,127 players - open to any professional and any amateur with a handicap not exceeding 1.4 eligible to enter - seeking to make the final field of 156. The previous record was 9,860 in 2013.

“ I think what Mike Davis said a few weeks ago is really true in that if you’re going to be ready for this tournament, it takes a lot more time to learn the golf course than just a couple of days, and if you’re having to use Monday through Wednesday to do that, you’re not putting that effort into your own game . . . . and I think that it’s a special course in that there’s a lot of different ways to play shots to a lot of different pins, and if you play the highest percentage shot, it’s not a hard golf course. But if you don’t know what that shot is, you play the wrong one, there’s a lot of penalty,” - Phil Mickelson - on the back of a confidence-boosting third place finish in the St Jude Classic, on how his advance visit to Chambers Bay has given him an edge.

“How silly is mike Davis USGA Says u need 10 practice rounds to win USopen.. When half the field didn’t get in event till 7 days ago” - former US PGA champion Steve Elkington doesn’t mince his words in what he thinks of Davis’s take on forward planning.

“Bill goat Bradley getting some work done out on these seaside dunes at Chambers Bay. What this nmb adjust? ‘4left” - no sympathy for his pal as Jason Dufner posts a pic of Keegan Bradley attempting to play a recovery shot from heavy rough off the side of a sand hill . . . .

“Walked a few holes with course architect Robert Trent Jones JR#ChambersBay” - Justin Rose, the champion two years ago, got some tips from the course designer ahead of the US open.

Q: In playing a stroke, an opponent disturbed some bushes, causing the player’s ball to move. What is the ruling?