A warm, engaging personality, the life and soul of any party and a hugely popular figure 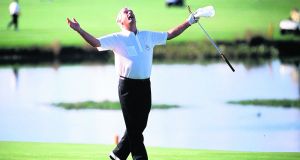 Christy O’Connor Jnr, nephew of Christy Snr, was a great deal more than a professional golfer. His death, aged 67, while on a family holiday in Tenerife with his wife, Ann, will be mourned for the man as much as the sportsman.

His exploits on the fairways are well documented, 17 professional wins, including victory in the Carroll’s Irish Open in 1975, one of four victories on the European Tour, were followed in later life by triumphing twice in the Seniors British Open and also chalking up a brace of successes on the Champions Tour in America.

O’Connor Jnr also excelled in team golf, representing Ireland in the World Cup on six occasions and three times in the Dunhill Cup, but it was the 1989 Ryder Cup that will perhaps leave his most enduing legacy; or one shot to be precise.

His glorious two-iron, to the 18th hole at the Belfry - there is a plaque there now to celebrate the achievement - that came to rest four feet from the pin, was an iconic moment in Irish sport.

O’Connor Jnr had received a wild card from European team captain Tony Jacklin to make the team, 14 years on from his only other Ryder Cup appearance in 1975, something that wasn’t universally acclaimed in some quarters at the time.

On that Sunday morning, O’Connor Jnr’s nerves weren’t helped by reading a newspaper article that all but wrote off his chances of taking down the American, Freddie Couples. “I felt terrible when I read it,” he later acknowledged.

To add further context, his singles opponent, Couples, who went on to win the US Masters and become world number one, had belted his drive down the fairway 60 yards past that of the Irishman. O’Connor held his nerve something that the American could not match, missing the green with a nine-iron and failing to get up and down.

The Irishman’s tears after accepting Couples’ handshake and the congratulations of his wife, Ann, and then Jacklin, as he stood rooted to the spot on the 18th green to a soundtrack of lusty cheering, underlined the emotional tariff of the occasion.

A warm, engaging personality with a good sense of humour and a genuine interest in others whatever their background, he was the life and soul of any party, pint in hand, and happy to sing or play the spoons for the collective enjoyment. His innate sociability made him a hugely popular figure.

Years ago the Irish Times ran a ladies golf competition and as part of the prize, there was an opportunity to receive gentle coaxing as much as coaching from Jnr at the par three, 16th tee box at Glasson. The shrieks of laughter could be heard from several fairways away and travelled intact to the bar that night.

Glasson was just one of the courses he designed, his golfing imprint can be found in over 30 projects throughout Europe and St Lucia. He had his own wine label, a collaboration with the Herdade das Servas vineyard in the Alentejo, a very famous wine producing region of Portugal and Celebrity Wines, a distributor of golf professional endorsed wines for globally recognised brands such as Gary Player, Arnold Palmer and Nick Faldo.

Golf has lost a wonderful character. To his family and friends were extend our sincere condolences. Ar dheis De go raibh a anam dilis.