Back to where it all began, where I took my first shot as a pro

Lowry delighted to be back playing matchplay, a format he loves 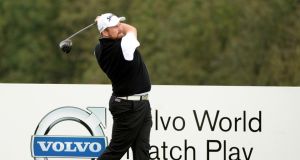 Shane Lowry on the seventh tee during his first-round match of the World Match Play Championship at The London Club yesterday. Photograph: Ross Kinnaird/Getty Images

I got a snapshot of my past on Tuesday as I arrived into the London Club, driving back through the gates down by the 10th and the 18th holes where I was able to get a look at the course where I made my professional debut.

That was in May 2009 and, here I am, 5½ years later, back at the scene of the crime, so to speak. Except now, I’m a completely different player, not so green behind the ears.

That European Open was the start of my professional life on tour. I was like an innocent abroad that week, with quite a lot of media commitments – given what I had done in winning the Irish Open as an amateur – and to be honest I didn’t fully know what was ahead of me.

Since then, there have been plenty of ups, plenty of downs and a lot of in-between as well. I’ve enjoyed every minute of it and have learnt as much from the bad times as I have taken from the good times.

It has been some five years. From the time I first received that packet from the PGA European Tour, which included my tour badge – my name engraved on it to prove it was real – and with it all the benefits and doors that open in having a full tour card, my life moved in a whole new direction.

This week’s world matchplay is on a different course to the one that staged the European Open. There are a few things I remember from my pro debut here: I remember I played the first two rounds with Paul McGinley and Anthony Wall and that as I went to the first tee on the first day, the legend that is John O’Leary came up to me and wished me luck, which I really appreciated. And, once I signed my first-round card that day, I knew I was in a new arena. It was every man for himself. I was on my own.

It was actually a tough week. I missed the cut and also missed the cut in the Wales Open and the BMW International in the weeks after before finally getting my first payday at the French Open, but I did learn a lot from that tough start and I am a different player now. There is no comparison in the confidence that I now bring to the golf course. I’m also longer off the tee, a better iron player and my short game has improved.

I honestly believe I am one hundred times a better player than I was back then. The biggest thing is that I have matured a lot – in that time, I have earned about 10 years in maturity as a golfer.

I am delighted to be back playing matchplay. I love the format and this opening group win over Stephen Gallacher has reaffirmed my belief that I am continuing to play well and with confidence.

I had finished second in Wales and sixth in the Dunhill Links before last week’s weather-hampered tournament in Portugal. I flew home on Sunday night and then took an evening flight to London on Monday.

I didn’t miss anything by not being at the course on Monday. It was washed out due to the weather, so nobody got to play, and I enjoyed my chance to be at home, even if it was only for a day. My caddie Dermot Byrne scouted out the course. His information that it was straightforward, all in front of you with a lot of drivers off tees, proved to be spot on.

I felt the pro-am on Tuesday was enough time to get to know the course, as it is new to everyone in the field. There was a sponsor function that night which meant I didn’t get to watch the Ireland-Germany game live but there was plenty of checking what was happening on twitter.

I had breakfast with Jamie Donaldson yesterday before the first series of matches and we both agreed there were no easy matches in any of the group. We knew that the course was set up for a lot of birdies, which suits me the way I have been playing. I went out against Stephen and basically continued what I have been doing in recent weeks.

For yesterday’s match, I decided to take a leaf out of Graeme McDowell’s book: when I played G-Mac in the Accenture Matchplay in Arizona a couple of years ago, he hardly said a word to me.

Even though we’re very close and friendly, there wasn’t much chat. I learnt from that. You have to try and put your foot on the gas and don’t ever take it off. It’s another case of it every man for himself.

I’ve come here with a lot of confidence. I felt I could have won in the Dunhill Links. Portugal was a washout and I was disappointed for the organisers, but this is a new week and a big week and it was great to get off to a winning start. I have Victor Dubuisson next and then Pablo Larrazabal.

I went out to hit a few putts afterwards. I hadn’t been fully comfortable on the greens and just wanted to improve my feel. When I say a few putts, I didn’t hit any more than 10. That was enough. I have my dad and uncle with me this week – and Neil Manchip was over for the day – so we just had a drink and something to eat and then back to the hotel to chill.

There’s a lot of golf to be played, the more the better.