Monaleen should have enough to see off Dromcollogher-Broadford in Limerick 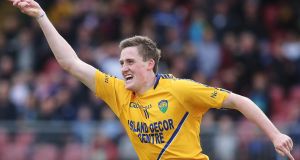 Ulster Club SFC quarter-final Scotstown (Monaghan) v Kilcoo (Down), Clones, 2.30 Two of the more seasoned sides around and both will have notions of greater things. Kilcoo have won five in a row in Down, Scotstown three of the last four in Monaghan. Darren and Kieran Hughes drive the Scotstown effort and they can carry the day here.

Antrim SFC final Cargin v St Gall’s, Corrigan Park, Belfast, 3.0 Cargin have never beaten St Gall’s in an Antrim final, losing seven – including three since 2010. They come in as champions and must feel this is their best chance, having sent St Gall’s packing at the semi-final stage last year.

Armagh SFC final Maghery v St Patrick’s Cullyhanna, Athletic Grounds, 4.0 A county championship that Crossmaglen had steamrolled for two decades is suddenly incredibly exciting. Neither of these sides has ever won the title before and though Cullyhanna slayed the beast, it’s Maghery who have looked strongest all the way.

Cavan SFC final replay Castlerahan v Ramor United, Breffni Park, 4.0 Ramor probably should have closed the drawn game out, having been six points up with 10 to go. But Castlerahan are richer in depth and especially experience than the Virginia side and getting out the gap with a draw might just have emboldened them for the replay.

Cork SFC final Ballincollig v Carbery Rangers, Páirc Uí Rinn, 4.0 A repeat of the 2014 final, Ballincollig’s first ever title. Carbery Rangers are looking for their first here and having been to six semi-finals since 2010, they have huge experience. Collig have been behind in most of their matches and are still standing so must be fancied.

Derry SFC final Slaughtneil v The Loup, Celtic Park, 3.45 Slaughtneil are chasing three in a row here, having already completed a four-time in the Derry hurling championship. They’re heavy favourites against a Loup team that admits they’ve even surprised themselves in making it this far.

Donegal SFC final Kilcar v Glenswilly,Ballybofey, 4.0 Glenswilly are veterans at this level and are in their fourth final since 2011 whereas Kilcar haven’t been here since manager Martin McHugh was playing in 1993. Kilcar are young and pacy and packed with McHughs and McBreartys wherever you look. Should be enough.

Kerry SFC final Dr Crokes v Kenmare District, Fitzgerald Stadium, 3.30 Crokes are back in the final for the first time in three years, Kenmare haven’t been here since 1987. The Killarney side should have enough to get by but they will have their hands full with a young Kenmare team managed by former Crokes midfielder John Galvin.

Kildare SFC final Moorefield v Sarsfields, Newbridge, 3.30 The Newbridge old firm meet in the final for the fifth time in 10 years. Sarsfields haven’t beaten Moorefield in a final since 2001 but did knock them out with a fair bit in hand last year and have enough talented youth on their side here to make the difference.

Laois SFC final Portlaoise v Stradbally, O’Moore Park, 3.30 With Portlaoise going for 10-in-a-row, it’s hard to get too excited about this one. That said, Stradbally were the last team to beat Portlaoise in a county final back in 2005 and they have repatriated Colm Begley from Parnells in Dublin so it’s possibly not a total lost cause.

Longford SFC final Abbeylara v St Columba’s, Pearse Park, 4.0 An real local derby in that many of these players would have played alongside all the way up as the two clubs make up an amalgamated team at underage. They’ve drawn four times in championship in recent years so there’ll hardly be much to choose between them.

Offaly SFC final Rhode v Ferbane,Tullamore, 3.0 Should be straightforward enough for Rhode who are to the modern era what Ferbane were to the 1990s. Looking for their eighth title in 12 years, Rhode have Niall McNamee in sparkling form.

Tyrone SFC final replay Coalisland v Killyclogher, Healy Park, 3.30 It’s been a year of draws in Tyrone so no surprise these two have to go again. Killyclogher looked like their goose was cooked late on last week but the sides were level 11 times so it’s likely to be a matter of who is ahead when the music stops. Wexford SHC final Cloughbawn v Oulart-the-Ballagh, Wexford Park, 3.30 Oulart look to be back on the horse after the brief haitus of 2014. Cloughbawn haven’t won since 1993 but they’ve been coming for the past two seasons and have a match-winner in Harry Kehoe. It would be an upset but not a massive shock if they won.

Clare SHC final Ballyea v Clonlara, Cusack Park, Ennis, 3.30 Led by Tony Kelly, Ballyea are on the hunt for their first ever county title. They’ve come through the more manageable side of the draw, however. And with Colm Galvin, John Conlon and Darach Honan in Clonlara’s line-up, Ballyea might have to wait another year.

Tipperary SHC final Kiladangan v Thurles Sarsfields, Semple Stadium, 3.30 Talk about David and Goliath. Kiladangan are in their first Tipp final since 1938 – where they lost to Thurles who were picking up the 11th of their 34 titles. Surprisingly beat Killenaule in the semi-final but the various Mahers and Cahills and Bourkes offer a mountain here.

Galway SHC final Gort v St Thomas, Pearse Stadium, 3.30 A meeting of south Galway minds, the clash of hard-to-beat Gort and a more mercurial St Thomas’s side. It’s St Thomas’s first final since they were All-Ireland champions and if Conor Cooney can replicate the form of their semi-final, they should have enough.