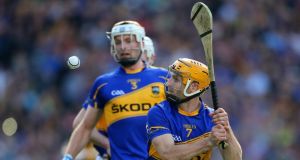 Tipperary’s Kieran Bergin is of the view the free awarded at the end of last month’s drawn All-Ireland final wasn’t a foul. The controversial decision by referee Barry Kelly led to Tipperary nearly winning the match.

“If you had to look at it from an objective kind of view,” said the All-Star nominated defender speaking at Croke Park yesterday, “I don’t think it really was a free myself. I suppose I shouldn’t really have said that. Ninety nine per cent of referees will give a free in.

“In fairness, I thought he (Kelly) did a good job overall but if I was a Kilkenny player I would have been expecting a free in there. Then again, you don’t really know the rules. Seemingly, he (Brian Hogan) did charge at him and he (Pádraic Maher) stood his ground. As it turns out, we lost the replay.”

Bergin also revealed that he had notions of winning the match himself, as club-mate John O’Dwyer squared up to the long-distance free.

“Yeah, actually I contemplated going up the right hand side. I think everybody was expecting him to pot it but sure he probably wouldn’t have passed it to me anyway! He would have more faith in his own ability in scoring it. To be honest, Bubbles is a unique old character . . . I don’t think there’s another player in the country I would want standing over that ball 97m out.”

“Speaking on behalf of all the players we would all love to see him stay around, and if he did leave it was nearly the first thing we were all discussing after the game, apart from being disappointed that we couldn’t win it for him. It would be a backwards step next year.

“I think talking to the players he is just trying to iron out a few issues that he had maybe with the county board last year . . . I think he needs a bit more funding or something. I think he should be able to iron that out and he will stay on.”

“Speaking to a few of the lads I met in club games, I think most of the players are on board for cutting the team holiday short and going on a training week to Spain because when you are in there from the start of the year you don’t get to bond with the players that much.

Looking back on the two final matches with Kilkenny, he feels the decision to call off a round of club matches between the draw and replay might have been a mistake. “I think we probably should have let off the round of club games after the draw. The three weeks between the games: I think if we let off the club games – hindsight is a great thing but I think that would have taken it off lads’ minds for another week.

“Three weeks is a long time for lads thinking and the hype builds up and you’re kind of saying ‘this will be the finish of it now’ and the social aspect takes over. I think it might have got in some lads’ heads a little bit, you know.”