With Galway in the hurling final and Mayo playing Dublin, it could be a glorious weekend 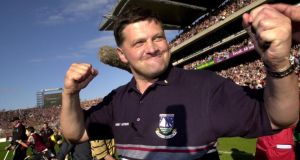 Former Mayo and Galway manager John O’Mahony: now a TD, he is hoping for a great double this weekend. Photograph: Dara Mac Dónaill

GAA fever is sweeping the west, with Galway and Mayo hoping to stage a double raid on Croke Park this weekend.

It is 27 years since Galway won the Liam McCarthy Cup and they will be hoping to upset aristocrats Kilkenny in tomorrow’s hurling decider.

Meanwhile, the replay of the All-Ireland football semi-final between Mayo and Dublin this afternoon will swell the numbers from the west.

Former Mayo and Galway manager John O’Mahony will get to meet and greet lots of people in Croke Park this weekend, people he hopes will hope will vote for him in the general election. He was elected as a TD in his native Mayo in the last election, but next time he will be running in Galway West, a constituency which also includes about 8,000 voters in south Mayo.

“The west of Ireland will be decamped to the east coast for the weekend, and here’s hoping for a great double,” says O’Mahony.

All-Ireland fever has gripped all of Co Galway in the two weeks since Anthony Cunningham’s troops sealed their place in tomorrow’s hurling decider. The last time they made it this far, in 2012, Kilkenny needed a replay before they could shake off Galway.

Wearing a Mayo jersey in Galway is a brave move at the best of times, but Mayo-born Loughrea resident Michelle Collins is not shy in nailing her colours to the mast.

“I’m from Tourmakeady originally, but a man brought me down to Loughrea a few years ago,” she says.

“I’ll be working on Sunday so I won’t get to the hurling, but I’ll be shouting on Mayo on Saturday. Maybe we’ll have two good wins to celebrate on Sunday evening.”