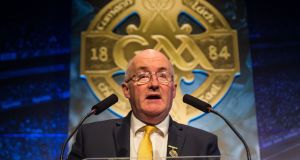 There is a moment when they close the doors at the GAA’s Annual Congress and you’re sitting there with a whole session of motions ahead of you and you might be forgiven for panicking.

Last weekend’s event had what many – including to be fair, myself – had termed a ‘low-key’ agenda, the euphemism deployed to be polite about an intimidatingly dull clár.

In this case the proceedings were at odds with what otherwise felt like a watershed congress even if lacking the sort of controversial motions that focus attention on the annual gathering of delegates.

Saturday saw a changeover in the presidency with Aogán Ó Fearghail stepping down and John Horan, replacing him. Between the pair of them they’ve also been busy overseeing the process by which a new director general will be chosen to succeed Páraic Duffy.

In other words the whole leadership apparatus of the GAA will have been completely replaced in the space of a couple of weeks. There is a permanent secretariat in Croke Park but the influence of presidents and especially, directors general defines whole eras.

Already there have been indications of shifting sands.

The long-serving Cork county secretary has been arguably the most influential member of congress in recent times. As well as his contributions to debates on various motions and defending his county’s interests, Murphy has been the GAA’s accepted authority on the rules.

For the past 15 years he has chaired the association’s Rules Advisory Committee and its forerunner the Rule Book Task Force as five presidencies came and went. The RAC continually reviews the rule book in the light of ongoing developments and proposes changes to reflect things like decisions of the DRA.

At congress each year, Murphy stands up and pilots through the various clarifications and restatements. There were 15 motions (out of 40) on Saturday and they passed with an average vote of more than 92 per cent. It’s not a section of the congress where anyone needs to plug in their pacemaker but it is required housekeeping.

Whether it’s entirely necessary to dedicate so much of congress – at the weekend 38 per cent of the motions clár – to issues that are by and large non-contentious is another matter. The changes should be vetted by Central Council and if any look remotely controversial they can be separately considered at congress. Otherwise the amendments could be taken en bloc and save a good bit of time.

Murphy’s successor as chair of the RAC is Liam Keane, who has more than earned his role. A solicitor from Meath, he was the first secretary of the DRA and has served continuously on the CHC and CAC disciplinary committees.

The new president wasn’t long in creating a frisson when querying the direction of the ubiquitous county development squad system at all age grades. He crystallised growing concerns about the creation of elites within the games at such young ages with the county panels becoming a point of identity for players in competition with their clubs.

“No young lad should be deemed a success or failure,” he said in his first press conference in office, “and I think young lads going to county development squad training should actually go in their club colours and keep it in their head that they’re still a club player.”

We have one GAA for all and that should be enough for us all. Sectional interest groups will weaken the overall effort

John Horan added that he would form an expert group to look at the matter and that ‘soft power’ (reviewing grants and relevant competitions) would be used to address the situation rather than reaching for the rule book.

The edgiest debate concluded in the defeat of the Club Players’ Association idea that delegates should be made accountable for their votes. Arguments exposed the fault-lines within the GAA when it comes to lobby groups.

European Board delegate Tony Bass reiterated a line from the previous year’s congress when he had said there was a body representing club players and “it was called the GAA”.

This point of view is not uncommon. Outgoing president Aogán Ó Fearghail had encapsulated it back in 2012 before he ran for office when as chair of the Ulster Council he had this to say at the provincial convention in response to a suggestion doing the rounds at the time that match officials might set up their own organisation.

“What next?” he asked. “A county chairmans association, a Gaelic lottery sellers’ society and perhaps a scór adjudicators’ union. We have one GAA for all and that should be enough for us all. Sectional interest groups will weaken the overall effort.”

CPA chair Micheál Briody was predictably unimpressed when the motion, proposed by Wexford’s Liam Griffin, bit the dust, saying that it was “embarrassing being part of the GAA”.

His substantive argument was undeniable. There was no good case put up against the call for accountability. Cork chair Tracey Kennedy said that it was a matter of trusting delegates to respect any mandates they had when going to congress – which must have raised eyebrows in those Cork clubs which voted in 2005 to open up Croke Park to rugby and soccer only to be told that such a fundamental change would have to be decided by county convention at the end of the year.

It remained though a curious issue to raise at congress in that it’s hard to think of any major votes where a failure to honour mandates was a material influence. That’s not to say it can’t arise in the future now that the show of hands has been replaced by electronic voting but it was hard to see the strategic value for the CPA.