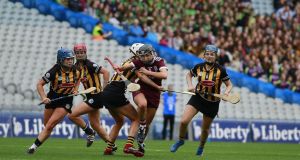 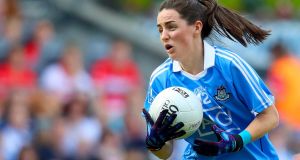 You couldn’t get a greater contrast in the stories of this year’s camogie and football All-Ireland winners, Galway collecting their first senior camogie title since 2013, while the Dublin footballers just kept on winning, completing a three-in-a-row a week later in front of that record crowd of 56,114 in Croke Park.

The Dubs, of course, had suffered their own All-Ireland agonies in recent times, not least during that spell when they lost three finals in a row to Cork, but there’s been no stopping them since 2017, the team getting the better of Mayo, Cork and, last month, Galway in that time.

Niamh Kilkenny will hope that the Galway camogie team can now follow a similar all-conquering path having ended a losing streak that saw them beaten in finals in 2008, 2010, 2011 and 2015, the midfielder featuring in them all. “I could write a book on losing All-Ireland finals,” as she put it.

But no one contributed more to Galway’s triumph last month, the quality of her display against – confusingly enough – Kilkenny prompting Joe Canning to take to Twitter and put an emoji of a goat beside her name – ie “greatest of all time”.

Along with fellow midfielder Aoife Donohue, Kilkenny helped her team take control of the middle third of the pitch for the bulk of the game, as well as brilliantly setting up Ailish O’Reilly for two first-half goals. And, just for good measure, she contributed four points herself in Galway’s 3-14 to 0-17 victory.

Having already been named player of the match in Galway’s defeat of reigning champions Cork in the semi-finals, Kilkenny picked up the honour again for her performance in the final, as well as a place on the shortlist for the player of the year award alongside team-mate Sarah Dervan and Kilkenny’s Michelle Quilty.

Lyndsey Davey’s contribution to Dublin’s success a week later was no less significant in what was a low-scoring game played in the trickiest of conditions. Her point from the second-half restart and her setting up of Hannah O’Neill’s 39th-minute goal ultimately proved crucial to the outcome, but more than anything it was her tireless work rate throughout the game that helped push Dublin over the line.

Remarkably, it was Davey’s 16th season with Dublin having made her debut as a 14-year-old, and she has been one of the driving forces behind their success, last month’s victory earning her a fourth All-Ireland medal. And her form through the year has earned her another All Star nomination, with four of them already to her name.

December: Mona McSharry (Swimming) The Sligo swimmer ended her 2018 in style at the Irish Short-Course Championships, collecting six titles in the space of just three days as well as breaking six national records, the highlight the breaking of Michelle Smith’s 23-year-old 100m freestyle record. And she carried on breaking records, including the Irish 50m fly mark at May’s Glasgow International Swim Meet.

The 24-year-old Cork woman took our January award for the second year running after an impressive start to the season, once again winning the 400m at the Vienna International Indoor Meet, ahead of European and World medallists Lissane De Whitte and Eilidh Doyle. Her hopes of building on that form were hit in April when she broke a bone in her foot, but she got herself back in to action and is now targeting Olympic qualification when the new season gets under way.

Another runner to have a sparkling start to 2019, Mageean opening the year by setting a new Irish indoor mile record in Boston, taking two seconds off her Irish Indoor 1,500m record before winning bronze in the 1500m at the European Indoor Championships in Glasgow. And last weekend she became the first Irish female athlete to reach a World Championship 1500m final since Sonia O’Sullivan in 1997, setting a new personal best while finishing tenth.

The Tipperary jockey has had a phenomenal year, finishing runner-up to Paul Townend in the race for the Irish Champion Jockey title, picking up two winners at the Cheltenham Festival, riding her first Grade One winner and also enjoying success in the Handicap Chase at Aintree. And that was only the half of it.

The Cavan woman achieved her goal for the season last Sunday when she did enough at the Symetra Tour Championship in Florida to earn her LPGA Tour card, her first victory as a professional, at April’s Windsor Golf Classic in California, sending her on her way. And she’ll have Irish company on the Tour next season after Stephanie Meadow sealed her card too at the weekend.

Having enjoyed an outstanding 2018, the 32-year-old member of the Salmon Leap club in Leixlip carried her form in to 2019, most notably in Poznan and Duisburg where, in the space of a week, she won two World Cup medals, missing out on gold in Poland by less than a second before taking bronze in Germany in another tight finish. Egan finished the season at number one in the canoe sprint world rankings.

Our four-time Sportswoman of the Year achieved the goal she set for herself when she entered the professional ranks, unifying the lightweight division with her victory over Delfine Persoon in Madison Square Garden. And next month she will bid to become a two-weight world champion when she steps up a division to fight WBO super-lightweight champion Christina Linardatou in Manchester.

When she won silver in the heptathlon at the European Under-20 Championships, 18-year-old Dundalk native O’Connor became the first Irish woman to medal at any level in the event. Adeleke, meanwhile, added to her collection of honours at the European Youth Olympic Festival, the Tallaght AC sprinter, who has since turned 17, winning gold in the 100m and 200m.

A year after winning gold in the single sculls at the World Championships in Bulgaria, Puspure, at the age of 37, successfully defended her title in Austria – and before doing so, she sealed qualification for the 2020 Olympics with a powerful performance in the semi-finals.