John Allen: Children’s sport is about more than winning

Some participants, parents or coaches get completely overwhelmed by emotion and their behaviours are often inappropriate 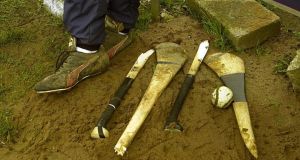 Why are we all so hung up on winning or losing? When did it become so important in sport? Is it in the human make up, psyche, or DNA to always want to be better than everybody else?

I suppose I better rest my case as far as adult sport is concerned. The bookies wouldn’t really appreciate an assault on their livelihood.

Okay so, let’s accept that there has to be a winner and a loser in serious adult sport and move on to dealing with winning and losing.

Most participants in sport have felt the thrill of victory and the misery (maybe too strong an emotion) of defeat. But in this current heightened awareness of Mental Health and the Gaelic Players Association’s much needed and welcomed attempt at addressing the many issues around the whole fallout from the winning/losing topic, there is a chance that the present and future generations of GAA players will be able to process the feelings and emotions in a more rational, logical way.

In our games ,when the referee calls a final halt to proceedings we have the winner, maybe experiencing a broad range of emotions in varying degrees of intensity. He may feel jubilant, satisfied, confident, superior, happy. But does he feel humble or have sympathy for the loser?

Similarly, the loser experiences his own wide array of emotions from depressed, angry, exasperated, anxious, frustrated and, maybe, inadequate. Some winners and losers keep their feelings to themselves while others share their innermost emotional experience with those around them, sometimes in a fashion that draws too much attention to themselves.

There’s a lot there. How many of us have some, any or all of those attributes? How does one cultivate and develop some, any or all of them? How important are the adults in our childhood in helping to mould rounded confident adults? I think we all know the answer there. I wonder how many of us can say that we helped to develop children who are confident or that we were helped to be confident adults? Because if we’ve encouraged our charges, those young people have more than an even chance of being able to handle life’s ups and downs.

There’s no question but that the competition in all sports can be a powerfully emotional experience ranging from the roller coaster high that comes with the thrill of victory to the demoralising agony of defeat. As a consequence, the outcome of winning or losing frequently generates powerful waves of emotions in participants: coaches, managers, selectors, fans, parents. Many hurlers/footballers, parents and coaches have learned through experience how to successfully handle these strong emotional currents. As a result, their behaviour in response to them are both effective and proper.

On the other hand, some participants, parents or coaches get completely overwhelmed by these emotional waves and, as a consequence, their behaviours are ineffective and often inappropriate. The fact of the matter is that your emotions always affect the way that you act. When you’re in control of these emotions, your actions mirror that. However, when your emotions control you, your actions can be ungraceful, and sometimes downright bad mannered and sometimes even worse than that.

The simple fact is that when we allow these strong emotions to control us we almost always always ended up doing the wrong thing.

Right so where are we going with this? Last summer I wrote a column here on the Kilbarry primary school lunchtime games. Theses games were the epitome of fun. There was never ever talk of winning or losing in these games. I got lots of very positive reaction from many who agreed with the point I was making as well as many telling me of their similar school yard experiences.

Winning and losing, arguably, is a blight to children’s sports. It is unnecessary and counterproductive. The emphasis, while the child is in primary school, should be solely on participation, exploration, experimentation, effort and fun.

In the adult games, obviously, the focus is different. At the elite GAA level it’s all about winning but at a cost for many.

Some of the mental difficulties our players have to contend with could be attributed to a lack of proper perspective and a consequent inability to differentiate between what’s really important in life and sport.

Late last year the GPA ran a series of conference call meetings for the intercounty managers on the importance of having squad reps. They were/are acutely aware that the first point of reference for important and often critical individual player issues is frequently with a member of the county management set-up and of course the squad rep is very important in conveying necessary issues as they arise.

GPA programmes and services are aiming at achieving that balanced lifestyle.

Rudyard Kipling often quoted lines from his poem If written in the late 19th century resonates louder than ever today in this turbulent testing sporting world.

“If you can meet with Triumph and Disaster

And treat those two impostors just the same”, then maybe happiness, satisfaction and sanity are but steps away .