Wexford survive a major scare as Carlow go down fighting 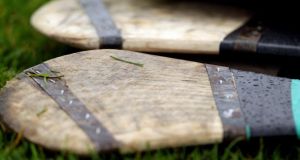 This was a real dogfight as Wexford had to dig deep before eventually edging to a two-point victory over a luckless Carlow at Wexford Park on Saturday evening.

For long periods of this game it looked as if Carlow were going to produce a shock result, and they were level 2-14 to 0-20 with five minutes remaining, but late points from Ciarán Kenny and Jack Guiney edged Wexford home.

Outsiders Carlow played with style and composure. Over the 70 minutes they played most of the quality hurling as they looked like handing manager John Meyler, a former Wexford manager, a victory on his return to native soil.

Leading by 0-17 to 1-12, after 57 minutes, Carlow missed a golden chance to extend their advantage. Substitute James Doyle won possession out to the right of goal but saw his shot flash just wide of the upright.

But Wexford struck for the game’s opening goal when a long crossfield ball from Jack Guiney was kept in play by corner-forward Paudge Doran who fired to the corner of the net from an acute angle.

Scores from John Michael Nolan, Craig Doyle and a long Jack Kavanagh effort, had Carlow back in front, leading 0-8 to 1-2, after 20 minutes.

English and Andrew Gaule exchanged points with Jack Guiney to leave the Barrowsiders leading 0-13 to 1-6 at the interval.

Again Carlow stepped up to the challenge on the resumption. After Garrett Sinnott and David English (a free) exchanged points, the visitors responded with points from Eddie Byrne and English.

When points from Jacob and a Guiney free extended the lead it looked as if Wexford were going to pull away but Carlow bounced back with excellent points from English, two frees, and Sean Murphy, to tie the sides, 2-14 to 0-20 with five minutes remaining.